This is a precursor to a longer piece I'm working on. This is a combination of an explanation of where I'm going to be going down the road and my bitching about something that is really pissing me off. The piece is is directly in response to several Tribeca docs which didn't do all they should, but there have been plenty more recently. I'm putting it out there in the hope of you, the reader,  giving me some feed back as to your experiences with what seems to be a trend.

I’ve been running into some badly organized documentaries of late. The some reviews have posted and others are coming, There have been any number of films recently and what it comes down to is I’m seeing too many films here things don’t have all of the information on the screen. Some of it is as simple as not making a time frame clear. IN ALL THIS PANIC  the events take place over three years but there is no indication of that in the film. We see hairstyles and seasons but there is no explanation as to when (or even where) we are. What worse is the dialog doesn’t reveal enough to let us know with the result is it looks sloppy.

More glaring is the increasing trend not to put it all on screen. Yes I know the cameras aren’t there 100% of the time, but if you are going to have characters talk about things you have to give us a context. More and more there is no context for what we are seeing. What are the people on screen talking about and why is this important? In several films recently people just talk at us as if we have all of the background, in STRIKE A POSE for example a heroin addiction is mentioned late in the game as if we had been privy to that tidbit earlier, we hadn't. In another example SHADOW WORLD the film leaps into a discussion of the BAE scandal in England with a one sentence statement as to what it is, (Reagan handed off a Saudi arms to deal to Thatcher) and then assumes that brings you up to speed, except it doesn't

I’m all for not knowing everything at the start but more and more the lack of explanation stretches to the final fade out. Directors clearly know their subject, but they increasingly either assume the audience knows what they do or simply don't under stand that they are not getting what they know and what we need to know across.

In some ways I’d like to sit the directors down and ask them why did you organize your film that way? Why did you no explain all of this or that? Why didn’t you think we need to know x,y and z?

Mostly I want to know if it’s a matter of the directors not showing their films to anyone for feedback. Most of the films with problems feel like the directors are too close to their subjects and can’t see it from the perspective of an audience who doesn’t know anything.

I really think this is the case because increasingly I'm getting press notes that are filling in way too much of what isn’t on the screen. For example the notes for ALL THIS PANIC explains the time frame and other details not in the film.

Whatever the reason the inability for documentary filmmakers to full engage and inform their audience has wrecked at least 3 films that would have been on my best of the year list had they not been edited by a baboon.

(I have to make clear that this is different than the trouble with a couple recent foreign language films which play one way until you realize that there is a cultural divide at work between intended audiences and once that’s filled in the films play better. What I mean is say they were made for a audience say in Tunisia who would understand certain things and not one in New York)

As I said this is what I'm seeing and experiencing more and more. I would love it if anyone wants to chime in on the subject either below in the comments or via emails since this is something that is really bothering me. I'd like to hear your thoughts or even take suggestions as to films where this is happening. As I said I'm working on a longer piece for later in the year and I'd like to hear what you think.
---- 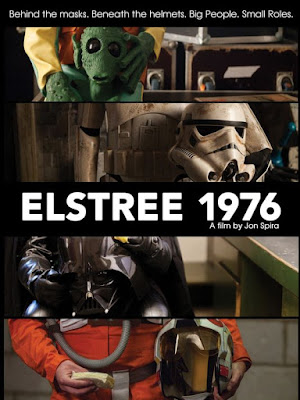 Its best described as a niche film for a niche audience that would probably be best seen as a DVD extra.

The film is a series of interviews with people who had mostly small roles, or even were extras in the original Star Wars  who now go to conventions and sign autographs. The biggest name is David Prowse who is on the outs with Lucasfilm he says because he  insists on promoting himself as Vader (but he is).

At a times a very good look at the weird end of fame and our need to connect to something we love the film also drifts off as the lives of some of the interviewees are less intriguing than others.

I liked it,and I love a couple of passages, but I was kind of left annoyed that I schlepped into the IFC Center in the early morning to see it.

Definitely worth  look for Star Wars fans and anyone one curious-but for god's sake wait for it to stream or hit cable.
----
Randi's Links