Pervert Park (2015) opens Friday and is a must see 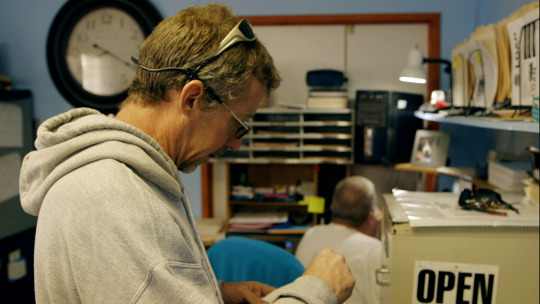 PERVERT PARK is a great film.

Its a film that has hung with me for the last year since I saw it at BAMcinema Fest. Its a film that is so f-ing good I should have broken with the agreement to only do capsule reviews for the BAM films and written the film up in a long review. Its a film that is so good that it needs to have it's praises shouted about from the mountain tops.  I should have, at the very least, done what I did with several other BAMcinema Fest films and  write up longer reviews and kept them until the theatrical release but a year ago this film didn't seem to be getting one- it's subject was rattling too many cages and forcing  stupid people to think.

The film is a look inside a trailer park where sex offenders live. We watch them go through their paces. We get to know them and see the effect of their crimes and their isolation on themselves and other people. Its a non-judgmental film that rips away the boogeyman mask and makes them what they really are, people. Seeing them as humans is a troubling thing for a world and a media that gets it's jollies by demonizing everyone and everything.

I loved this film, and it almost made it on my best of the best of 2015 list.

Easily one of the best documentaries I've seen in the last 12 months this is a must see. It's a film that will move you and make you think. I also think it will surprise you in how unsensational it all is. Its a film that is going to piss off certain portions of society which need over blown monsters to make itself feel safe. I say that not to lessen what these men and women did, rather to point out that reducing them or their lives down to just their crime isn't right.

Below is the piece I wrote last year after seeing the film at BAM.


PERVERT PARK is easily one of the best films at BAMcinema Fest and maybe the year.This look at a trailer park where registered sex offenders live is kick ass. Portrait of a group of men and women who are trying to get by and overcome their past is fantastic. This is good time with good people which reveals a side of life most people never consider, that the offenders are people despite their crimes. We want to keep registered sex offenders away from the people they might harm, but what does that mean? Not just for them but us? This film expertly explores that and other issues-like why outside of the odd place like this park aren’t the offenders getting counseling? A great great film that needs more than the capsule I’m supposed to do.
Posted by Steve Kopian at May 16, 2016