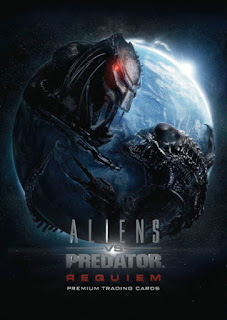 Bookending this weekend is my review of the second Alien Vs Preadtor film. I write this way back wen the film came out and now posting it  as a means of filling out the weekend pairing.

At the end of Alien vs Predator a predator on a ship in orbit around earth had a chestburster explode from inside it. As this film begins the little monster grows and causes the ship to crash back on earth. The alien and other facehuggers get out and begin to change a small town in the woods. One of the predators, dying from the crash, sends word back to his home planet and "help" is on the way. As people go missing, monsters go on the prowl and begin to battle each other.

Short, this film is only about 85 minutes, so there isn't much exposition. we know the drill. Aliens hunt people and make more aliens, predators hunt aliens. People try to fight back but are hopelessly over matched.

And the monster stuff  works. the aliens and the predators do what they have to kill people and each other in spectacular fashion. The monster stuff in the film is really good.

The problem is that we are saddled with a bunch of cardboard humans who are as "teen horror" cliché as you can get. Lets face it despite the actors best efforts the humans aren't people they are cardboard cut outs. They give us so many characters and give us such a short amount of time (with some of them nothing more than monster fodder) there is no way for them to really be anything other than just cardboard targets. It kills the film. You don't care and you just want to see them die. I kept thinking "Get to the good stuff. Get to the monsters". If there is a way of chopping the film down to just the monsters that would be cool. Actually if they were going to treat the people as monster food why didn't they just tell the story from the predators point of view and it all would have been good stuff and we would have known why the people go the short end of the stick.

I know people are going bananas because they film alters what we know about aliens and predators. I'm okay with some of the playing around. What bothers me is the time frame for alien birth. Its much too fluid in this film. What's worse more often then not its much too fast. We need lots of aliens so we'll have them spawn faster. Never mind changing what we know its just too damn fast (the hospital sequence is particularly annoying)

The monster stuff is great and worth a look. the rest of it is considerably less so. And as for those who hated the first Alien Predator film- here's a reason to like the first one. (I loved the first one and am so disappointed in this one it hurts)
Posted by Steve Kopian at January 07, 2018