Here now is quick word on the films I screened.

3D ANIMATED SHORTS
This is a collection of largely computer generated shorts meant to be seen in 3D. All of the films have eye popping effects that will be lessened if not seen as intended and on the big screen. A must see collection because of the effects.

Time Out
Thrill ride video as a man climb a clock tower and get bounced around inside it. A must see large and in 3D, it will not have the same effect on a small screen.

5 Meters
This is the awesome film about high diving giraffes. As I said when I originally reviewed it "Wickedly cool and damn near perfect"

Mr Hublot
2013 Oscar winning Animated Short will either thrill you or leave you cold. Forgive me I still don't know why this won the Oscar.

Table Bob
Very short film is a blackout sketch of shorts about a little man dancing on a table until he meets a bad end. A trifle

PIONEERS OF ANIMATION (Autour des pionniers de l'animation)
At the risk of having the festival PR people hunt me down and kill me I'm going to begin by saying that of all the collections this is the one that isn't for everyone. A mix of differing styles of animation and of quality this is a group of films that is not going to play well for everyone. It's not that te films are bad, it's more that some are stilted by modern standards. While the Segundo de Chamon film is great  regardless some of the others can be an aquitred taste since these films were made when animation was in it's infancy.  Recommended for students of film and those wanting to see how animation evolved.

Les Locataires d'à côté (1909)
Two couples living next to each other. The older tries to spy on the younger one at which point the couple becomes animated. Very odd partly animated film that is more curio than anything.

Sculpteur moderne (1908) Segundo de Chomón
Yes the great Spanish filmmaker is represented here. Its not a mistake since he worked in France for Pathe. Here a sculptor unveils their work which comes to life. Like all of de Chomon's work a must see. 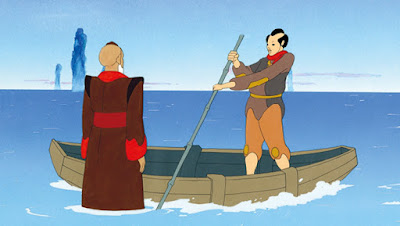 René Laloux
Animation First is screening the classic FANTASTIC PLANET  by Rene Laloux along wit tree of his shorts. The films can be even stranger than Laloux's feature work and seeing them with the FANTASTIC PLANET is a perfect way to spend an evening.

Les Escargots
A man toils in a field and giant snails wander about. Very Strange

Les Dents du Singe
Strange cut out animation that I'm not sure if I like even if it has monkeys as dentists.

Comment Wang-Fô fut sauvé
Asian set tale is probably te most beautiful film being screened during the whole evening. I have no idea what I fully think of the film but I wish I had seen tis on a big screen.

THEY WON!
A very full collection of award winning shorts as tons of great films in them. While I've seen several of them previously, it's been too long to be able to write them up. I have written up the films that I was allowed to screen by the festival.

Logorama
Stunning visually amazing film about a would filled with living product logos. A copyright nightmare the film is just as amazing as they come and an absolute must see- especially if you've never seen this on a big screen since it will take your breath away.

Pixels
8 bit video game characters invade our world. This begat te feature film of the same name but is probably ten times more delightful. Its a damn near perfect film and a must see.

For tickets to any of the short collections of anything at Animation First go here.
Posted by Steve Kopian at January 31, 2018