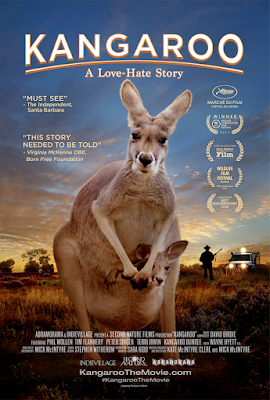 The slaughter of kangaroos in Australia is the largest wildlife slaughter currently happening in the world. Viewed both as a national symbol, many others view them as a pest to be eradicated or a commodity to be exploited. Every day tens of thousands are brutally killed and either left where they die or are chomped up for commercial purposes with the heads and unusable bits left scattered.

The subtitle of the film sums up my feelings for this film perfectly this is a good story unevenly told with the result I kind of zoned out about twenty minutes in.

The problem for me is the telling which is scattershot with the film pinging from person to person and thing to thing. There doesn't seem to be a through line just a lot of people talking about how bad the slaughter is. I think we were 15 or 20 minutes into the film before why exactly people thought the kangaroos were pests. Having gotten to the end of the film I'm still not sure of what I saw.

Other than the slaughter is bad and has to be stopped - but I'm not sure what I'm supposed to get from this film. I'm also not sure way this film need to be 100 minutes since some bits go on too long and others seem to repeat points.

While not a bad film I'm left to ponder why am I being told this story in this way... This would have been better sorter and more concise.

KANGAROO: A LOVE HATE STORY opens today and is a miss.
Posted by Steve Kopian at January 19, 2018