Thoughts on Hostiles (2017) the first time through 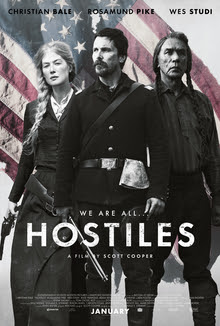 On the verge of mustering out, an army captain is forced to take captured Native American chief and his family from New Mexico to Montana so he can die at home. He wants no part of it, but he is  not one to disobey orders, especially if it means he will lose his pension.  Along the way he will pick up a woman whose family was killed by raiders, fight off various forms of attack and have to come to terms with who he is.

HOSTILES was not what I expected. That is a good thing.

Billed in TV commercials as an action packed road trip, it is in fact a deliberately paced, thoughtful examination of our souls.It is a film that isn't action packed but has action. It has moments of intense violence and touching humanity.

I don't know were to begin discussing this film. It's not that there isn't anything to say but almost that there is too much to say. Literary in construction, I suspect some people may not like some of the thoughtful exchanges that pass between the traveler. This is a film with a lot on its mind. It is a film poses a good many questions such as who are we really? What is the cost of war? What is the cost of racism? and most importantly can we find a way back to being human? It is a film that makes a stab at answering, or if not answering then wrestling with, all of them as well a several dozen more. 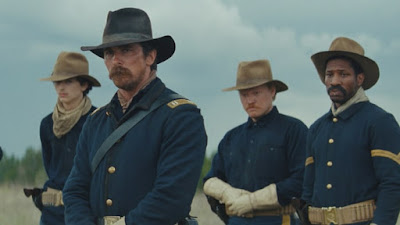 A road movie of the soul, we are on a trip where all of the characters are going to have to deal with the crucibles of themselves. On the road and in close quarters, with no routine but the travel everyone has to face who they are, what they've done and how they feel or don't feel about it. It is a journey that could ultimately free them and return them to humanity or destroy them utterly, a fate that is faced by a few of the travelers. And if there was ever any hope of not having to face their pasts it goes out the window when they pick up a prisoner for transport. An fugitive soldier wanted for murder, he once served with Christian Bale's captain and he knows of Bale's dark deeds. Pleading to be let go, since he didn't do anything Bale hadn't done before, Bale has to find away to keep his charge in chains and his soul intact.

Along the way the film moves us to not just think, but to feel. Twists and violence bring us feelings of shock and awe. Seemingly small moments bring us to tears. This is a film that engages all of us on all levels.

I want to say more. I want to discuss what happens but as this posts HOSTILES is still only in selected theaters so most of you haven't yet had a chance to see it. I don't want to spoil this film by saying too much of what happens. Additionally I want to, nay I need to see this film again simply because this film surprised me so much I need to go back and link up some moments and really take in what happens so I can properly discuss them.

HOSTILES opens wide in theaters across the country Friday. It is highly recommended for anyone wanting an excellent movie or a thoughtful western