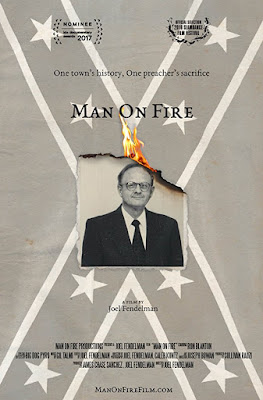 I saw MAN ON FIRE away from the Slamdance screening , which is a good thing. The thought of following it with any additional film or frivolity would have wrecked what ever came next. I do not envy anyone who is seeing this at the festival and then has to follow it up with something else.

MAN ON FIRE is a look at Charles Moore a minister who set himself on fire in order to call attention to the racism in the town of Grand Saline Texas. A town that has never been welcoming to African Americans. It is a place that even today many avoid still because the town's history is so bad. The film looks a hard look at both Moore and the town and ponders what was it that drove a man to martyr himself in the name of social justice.

This quiet meditation on racism in America will drive you to your knees. No matter where you stand on notions of race this film is going to force you to reevaluate what you think and feel. Refusing to get loud or yell and scream the film worms it's way into your heart and soul in ways that many bigger budgeted and more well know explorations of race have.

It takes to task any and all notions and excuses for why the town has been home to so much hatred and finds them worthless. It is not content with just examining why people feel as they do, it also takes everyone to task for allowing it to happen by saying it's someone else's problem. By the time it's over it will remove any of the crutches you have that we use to make ourselves feel less racist.

This portrait of a nice town with nice people will leave you staring at the screen. Yes, some people are more racist than others but some where in the mix you are going to find someone who echoes yourself even if it's in the person who admits there is a problem that has to worked out.

Also hanging over the film is the person of Charles Moore. He was by all accounts a good man of God. While not perfect, his calling came before his family, he was still well loved even by the family. Moore's decision to die in such a public way rattled many people, more so since it was clear that he had been planning the act for two years.

As much as the question of small town racism is in focus in the film, so is the question of what would drive a man to make such a final statement? What was gained by it? Did he have to die in order to get his point across?

To say Moore was disturbed is, in a way, taking an easy way out. There is more to it than that, especially owing to his life of belief. Someone like Moore does not throw his life away on a statement that can be wished away by madness, there is something more, something almost Christ like in the self-sacrifice.

Somewhere past the halfway point I realized I was kind of broken. Whatever I thought I knew had been questioned. Notions of where I stood on the racism scale were no longer clear. Also my thoughts on the nature of belief were rattled since, more than almost any recent case, Moore was a true Christian martyr. What was the path to God that he chose to take? I didn't fully understand. I was moved to the point of being shattered.

MAN ON FIRE haunts me. As any truly great film it as broken my defenses and forced me to ponder what it means. For hours after seeing the film I was writing down thoughts and ideas on whatever I ad handy in the hope of piecing it all together in a review. I'm not sure I have down even a fraction of my thoughts.

This film demands to be seen, to be shared and discussed.