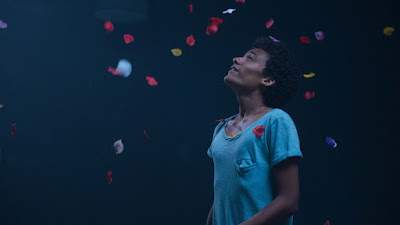 Damon Cardasis's SATURDAY CHURCH is a masterpiece. It is a wonderful film about finding yourself and finding a place you fit in. It is a one of a kind film that must be seen.

Ulysses is a teenage boy who is a shy and effeminate boy. He likes wearing women's clothing, something tat causes him no end of trouble. Uncertain of who he is and where he belongs, he stumbles into Saturday Church a program for LGBTQ youth. There he finds a place where he can open up and be who he is. Unsure of how the two worlds will see each other he struggles to keep his regular life and church separate. However when the two collide his life is thrown into disarray.

When SATURDAY CHURCH played Tribeca last year anyone who saw it loved it. Word was so good that I rearranged my schedule to see it because few films at Tribeca result in that much universal love. I saw the film, loved it, but never fully reviewed it because  a miscommunication about who was covering it resulted in only a brief capsule being posted. I didn't realize it until I saw that the film was coming out and I went to rerun the review only to find there wasn't anything to rerun. It was clear I had to see the film again and get something up.

Refusing to be anything but itself this is a film that kind of defies classification. A heartfelt look at feeling as though you are an outsider it doesn't skim on either the good or bad emotion. We feel the pain of being unstuck in our lives and we feel the joy of finding a place to belong. Director Cardasis always manages to balance the emotions perfectly so  we feel the terror of Ulysses bible thumping aunt but at the same time he never lets Regina Taylor's performance fall completely into being a one note villain.

Cardasis also manages to blend in the musical performances (did I forget to tell you this is a musical?) perfectly. The songs come at perfect times and they manage to enhance both the emotion and plot by never going for a showstopper in a small moment.

How and why this film isn't getting a bigger buzz confounds me. This is a great great film that needs to be seen and shared. That more people haven't been talking about the film I can only chalk up to not enough people seeing the film yet. Certainly anyone who as seen it will always have it rattling around in their brain- I certainly do.

Simply put this is a beautifully made and wonderfully acted film that worms it's way into your heart and carries you along.

SATURDAY CHURCH opens in NY and LA tomorrow as well as hitting all VOD platforms
Posted by Steve Kopian at January 11, 2018