Nate hood looks at I, DANIEL BLAKE which has hit Blu-ray and DVD from Criterion 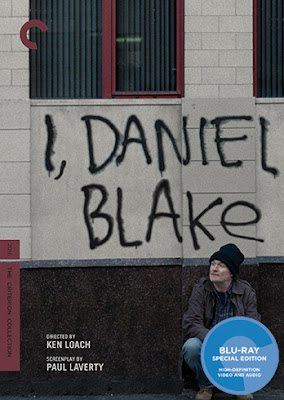 For the first time in my life, I literally tasted bile in my mouth while watching a movie. It was right around the time in Ken Loach’s I, Daniel Blake when the the titular character, a 59-year old joiner forced to navigate the UK’s impenetrable healthcare bureaucracy after being declared “Fit to Work” after suffering a serious heart attack, gets help from a friendly government agent to fill out his online paperwork. Despite literally helping him click just few buttons on a website, she gets called into her boss’ office and chewed out for “setting a precedent.” A precedent for what? Doing her job? Helping the people the taxpayers pay her to help? The answer: not following “protocol.” It was so simple, so stupidly unnecessary, so needlessly cruel that it literally made stomach acid shoot up my throat into my mouth where it sat and curdled for the rest of the day. I’ve laughed and cried at many a movie. But few have inspired such a violent physical reaction as I, Daniel Blake.

To say it’s Loach’s best film in years, if not decades, is not understatement. Here is a film with the outraged fire of youth curated with the skill of a master craftsman. With mechanical, almost surgical precision Loach lays out the succession of humiliations and indignities foisted upon Daniel (Dave Johns). First he gets declared “Fit to Work” by the government despite being declared unfit by his doctor. Then the medical bureaucracy forces him to fill out a number of obtuse forms he can’t understand on a computer he can’t use. Then the paperwork is declared immaterial since he didn’t get his “Fit to Work” status confirmed by an enigmatic “Decision Maker.” Then when he finally gets the needed confirmation, they tell him he can’t get his benefits without a CV—a preposterous demand for a man who’s spent 40 years as a laborer. There’s always one more form to fill out, always one more course to take. It all reminds me of the backwards government bureaucracy in Akira Kurosawa’s Ikiru (1952)—it seems designed not to help people but to get them to give up.

During one of his fruitless visits to the government offices, Daniel meets a single mother named Katie (Hayley Squires) with two small children who’s moved 300 miles away from their home in London after getting thrown out of their flat by a cruel landlord. He takes them under his wing, doing odd jobs around their house as well as slipping them the occasional £20 for the heating. A scene where Daniel takes Katie to a local food bank ranks among the most heart-breaking in recent cinema—the entire theater audibly gasped during it. And things only get worse from there when she turns to desperate measures to put food in her children’s mouths.

I, Daniel Blake leads up to a predictable, melodramatic climax complete with dramatic speech chastising the government. But it felt earned. It’s by far his most overtly political film, by far his angriest and most direct. Whereas before Loach was content enough to observe, here he accuses. His audience is clearly the people in power who strip honest citizens like Daniel Blake of their lives and livelihoods. Here’s hoping they listen.

I,DANIEL BLAKE has been released on home video by the Criterion Collection with extras that include an audio commentary from 2016 featuring Loach and screenwriter Paul Laverty; How to Make a Ken Loach Film, a 2016 documentary on the production of I, Daniel Blake; and Versus: The Life and Films of Ken Loach, a 2016 documentary directed by Louise Osmond
Posted by Steve Kopian at January 18, 2018