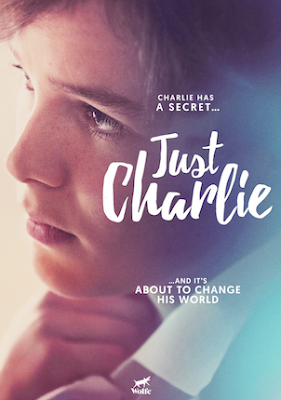 Teenager Charlie is a champion football player in England. He is headed toward a huge career in the pros. His father is thrilled since in Charlie he sees the opportunity he never had in his life. The trouble is Charlie isn't sure he wants to go that route, at least not as a boy.

Good heartfelt look at the trouble of coming out as a trans-gendered person. Looking at all of the problems one can run into JUST CHARLIE makes us feel for the young woman's plight.

Beautifully acted, especially by Harry Gilby as Charlie, the cast manages to hold our attention even when the script hits the expected points a little neatly. It is the cast that makes this film worth the price of a rental.

My one quibble with the film is the ending, which while fine unto itself, comes after a rather dark and unexpected turn which would have made a more powerful ending. Had the filmmakers not opted to lighten things up I would have loved JUST CHARLIE even more, however they did and I kind of feel slightly cheated.

Reservations aside, JUST CHARLIE is recommended.

JUST CHARLIE  is released on DVD and VOD Tuesday from Wolfe Video
Posted by Steve Kopian at January 27, 2018