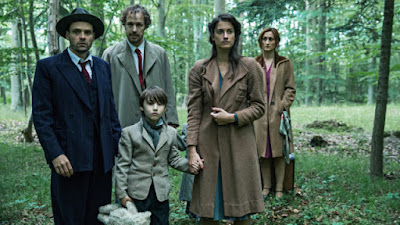 Based on a true story, ACROSS THE WATERS tells the story of a guitarist and is family who flee to the north of the country looking for a way to escape the Nazi's. It seems the coalition that had kept the Danish Jews safe has collapsed and now no one was safe. The family is hoping to make their way and connect to the underground who they have heard are ferrying people to Sweden.

This is a very good is overly earnest film about a flight to freedom. Gorgeously shot, the Second World War has ever been made to look this good. The film moves by twists and turns in such a way as to be play as the top notch thriller that it is. It is also a moving and truth portrait of good people rising to help others in dark times.

If I must quibble with the film it's in that the copious use of close ups often works against the film making not so much claustrophobic but simply uncomfortable.

On the other hand the natural drama in the story lifts it all up and makes it all compelling.

Definitely worth a look when it plays at The New York Jewish Film Festival.
Posted by Steve Kopian at January 17, 2018