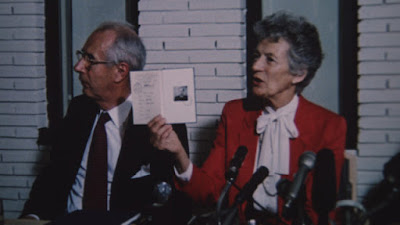 One of my heroes is Raoul Wallenberg. He was assigned to the Swedish Embassy in Budapest in 1944 and quickly proceeded to save as many Jews as he could, with the number put around 100,000. What endeared him to me was his absolute drive to do the right thing even to the point of telling Nazi officers that they were losing the war and if they didn't respect the papers he had given the Jews , he would make sure that they were punished after the war.

While Wallenberg did so much in roughly six months many people still don't know who he is because in January 1945, he got into a car and disappeared off the face of the earth. All tat is certain is tat te Soviets picked him, but after that noting. THE MISSION OF RAOUL WALLENBERG is a film looking into the mystery.

Released in 1990 and now being screened at the New York Jewish Film Festival in a new restoration, the film seeks to probe the disappearance as best it can. Following leads, the filmmakers talk to people claiming to have seen Wallenberg after his arrest as well as Wallenberg's sister and brother as they travel trough Russia looking for answers. The film also seeks to speculate as to the reasons why it happened. Nothing is clear and in the 28 years since the film was released even more twists and turns have emerged (for example he as connection to the American OSS).

A wonderful puzzle box of a film this is a trip down a rabbit hole. Plots are speculated, false leads are followed and very few answers are arrived at- though it's clear there was a KGB file since his possessions ad to come from somewhere. I was enthralled.

As good and as trippy the film does have two minor flaws. The first, which isn't really a flaw as such, is that the film can be light on details concerning Wallenberg's life. This is about the search and not the man so if you don't know the man you may feel lost. The second minor issue is that after almost 30 years the film could have used some sort of brief updating. In the intervening more facts (The OSS and Sweden declaring him dead) have been discovered as well as new possible answers (e may have been executed) have arisen. While not necessary a brief post script would have helped make it clear that even 73 years on people are still looking for answers.

A great documentary and highly recommended when it plays the New York Jewish Film Festival.

For tickets and more information go here.
Posted by Steve Kopian at January 13, 2018