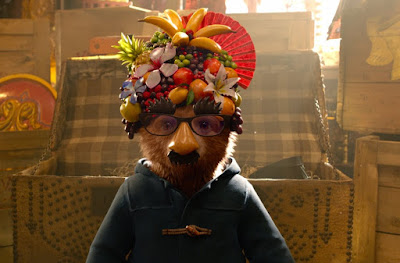 Had the US been gifted with a release of PADDINGTON 2 with the rest of the world in 2017 it would ave been on many people's best of the year list. It would probably have been my favorite film of the year. As it stands now it is carefully entrenched in the number one spot for 2018  and I would be hard pressed to think of an upcoming film that will knock it out. It is in fact one of my new all time favorite films.

Happily living with the Browns in London, Paddington decides he has to find a birthday  gift for his Aunt Lucy back in South America to show her how much she means to him. Finding a pop of book of London, Paddington gets a job to save enough money to buy it. However an evil actor who knows that the book is the key to a fortune steals the book and frames Paddington. Thrown in prison the Brown try to free their friend while Paddington tries to survive prison.

Bring tissues when you see this film because rarely as any film ever been so joyously marvelously happy.You will get misty all over the place- and if you don't I don't think I want to know you. 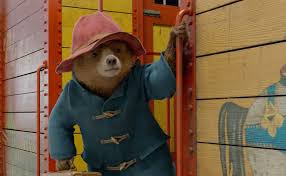 A wonderful celebration of pluck, family friends and marmalade PADDINGTON 2 is a pure shot of cinematic joy. It is film that takes all of the joy centers of you mind and dances on them until you smile uncontrollably and stupidly. This is a cinematic love letter to the best things in life and as a result I have no rational thoughts concerning this film.

Before I end and go get tickets to see the film again I do have to say a couple of quick things:

The cast is first rate across the board with Sally Hawkins being spectacular as Mrs Brown. If you loved er in THE SHAPE OF WATER you'll go giddy during a water sequence late in the film.

The technical achievement will leave you gaga with some truly amazing visuals such as Padding ton and Aunt Lucy walking through a pop up book version of London.

Lastly bring some tissues or napkins because this amount of pure joy will result in unintentional misting.

For those in the US PADDINGTON 2 is the first great film of 2018. For the rest of the world its just a great film.

See it in US theaters when it opens Friday. 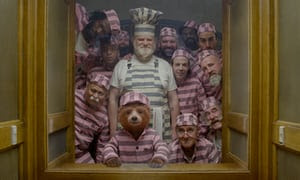