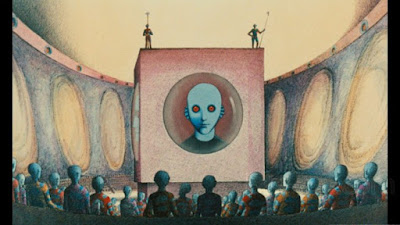 René Laloux's FANTASTIC PLANET was the film that changed the way many Americans saw animation. In a country were  any sort of feature animation was restricted to Disney's out put and  the very rare imported kids film, animated features were just for kids except for perhaps the occasional Ralph Bakshi masterpiece. No one, as far as most people in America were concerned were doing anything with animation tat pushed the boundaries.

Of course everyone was wrong since there were thriving industries in Japan and Europe, but we never saw it because no one thought there was a market.

That FANTASTIC PLANET got a real US release is amazing. I was a kid in the 70's and I remember my mind being blown by the crazy images I was seeing on the TV screen. What was this film that was coming to theaters? I had no idea. I wouldn't know until the film played on cable in semi regular rotation a couple of years later.

The film is set on the world Ygam were the blue Draags who rule over the smaller human Oms as if they were pets. The conflict between the two species drives the plot as the Oms attempt to break free and make to Ygams moon.

Full of incredible imagery and heady ideas the film found a secure place as a second level midnight movie where Laloux's animation created a unique head space. This was never a film I watched with any regularity because the film required I go with it to Ygam. Its other worldliness was something that both won it fans and lost it viewers who found it too weird.

But its the fact tat it is unlike any other films except Laloux's other films that as made it stay fresh and alive even 45 years later.

If you've never seen the film you should. If you never seen it on a big screen you must go see it when it plays this weekend at Animation first. Yes the Criterion DVD is nice but act of seeing this on the big screen is life changing. It will truly alter how you see the world and animation.

FANTASTIC PLANET plays next weekend at Animation First in NYC. For tickets and more information go here.
Posted by Steve Kopian at January 28, 2018