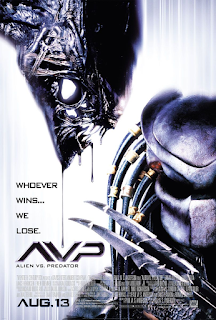 This is a piece I wrote way back when the film came out.Seeing the film again recently I decided to post this review, and the one for the sequel that goes goes up tomorrow. I know  the AVP films are much maligned but considering the recent Ridley Scott revisions of the Alien legend these films suddenly play infinitely better than they once did.

First off, you MUST get away from the fan boy mentality. Forget the fact its not rated R, that it tinkers with a bit of alien lore, and accept that the visual effects are just okay at times- The fight on the ice in particular. If you take this for what it is, and on its own terms then you will find that this is quite simply one of the best action films in ages, and a worthy addition to both franchises.

The plot has a pyramid discovered under the ice on an island near Antarctica. A scientific team is dispatched and very quickly they realize that something isn't right. Proceeding under the ice they find that the pyramid links to many ancient cultures. They also find out what its real purpose is to provide a safe place to hunt for the Predators, unfortunately by that time, its way too late for team.

I loved this movie. Seeming to pull chunks of story from any number of the Alien and Predator comics and novels the film makers have fashioned one hell of a ride. I do not know the last time the audience applauded the events on the screen, that they screamed and yelled and talked out loud in nervously. This movie exceeded my expectations and then some.

See this movie. Its a flawed guilty pleasure of the highest order.
Posted by Steve Kopian at January 06, 2018