World of Tomorrow Episode 2: The Burden of Other People's Thoughts (2017) 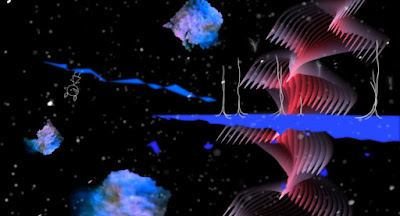 Don Hertzfeldt's WORLD OF TOMORROW series continues thus proving the universe seems to know what will make us happy and better people.

The new installment has young Emily (prime) being visited by the older unhappy clone of herself Emily 6. 6 wants to give up all her memories and simply lose herself in the memories of her original so she begins to meld the two minds at which point things go wonderfully banana shaped.

If you've seen the first you know what to expect- a glorious off kilter exploration of everything that ping pongs off the musings of a little girl who is much too innocent to be bothered by what the adult version of herself is saying. Glimmers of hope are found and then intentionally lost again, memories are tasted. Sisters are lost and found. And some were in the middle of it all the profound nature of the universe is revealed...okay maybe not the universe but personal existence.

The images are stunning. While Hertzfeldt keeps his protagonists simple he creates backgrounds that inspire a true sense of awe and wonder. As each new landscape appeared I found myself mumbling under my breath about the wonder of it all.

Can Hertzfeldt continue the series and keep it as artistically and spiritually moving? I hope so. As it stand now he as created two films that make up one of the most profound films I've ever seen. The WORLD OF TOMORROW films are filmmaking at the highest level. Forget that they are animation or science fiction, this is simply cinema of the soul. If you go with Hertzfeldt and think about what he is showing us you will be changed not just your mind but as a person.

I have been changed.

The film can be rented by clicking on the link below and is absolutely worth the time and money.