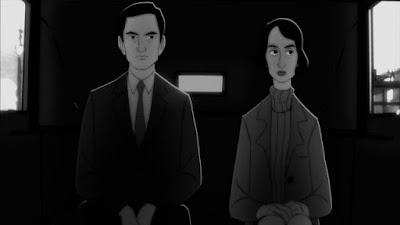 The film is a record of director Peter Stephan Jungk of his Aunt photographer Edith Tudor-Hart. While he and is family was aware that she was a famous photographer, they were completely unaware that she was a Soviet spy- and not just any spy but the woman who brought together the Cambridge Five- the group that included Kim Philby.

Fantastic portrait of a woman, a family and of a time when the commies were seen with suspicion by some and savior by others. For me the film was enlightening since for the  first time I really got a sense of the whys and hows things like the spy ring happened. There is a real effort to explore what people are thinking. I am haunted by one of the comments one of the interviewees says when he explains how many people fell in love with communism and decided to spy for the Soviets - none of which had been there. The implication being that if they really saw what the Soviet system was they wouldn't have done it. Its a comment that hangs over the film and makes you consider "what if..."

Deftly handled and beautifully put together with a mix of photos, talking heads and animation TRACKING EDITH is as compelling as a film  as I've seen in quite awhile. Rarely ave I been engaged with a film on so many levels- and more importantly rarely have I wanted to start the film over again as soon as I finished it.

I can't recommend this film enough.

See it when it plays one of two times on January 22 at the New York Jewish Film Festival. For more information and tickets go here.

ADDENDUM:
TRACKING EDITH has been picked up by First Run Features for release in the US in the fall of 2018
Posted by Steve Kopian at January 20, 2018