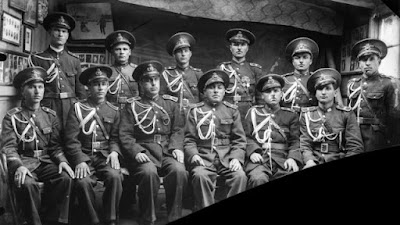 Radu Jude's documentary of life in Romania from 1937 to 1944 is going to either thrill or annoy the audience. Made up of photographs by photographer Costica Acsitne over which period music, speeches and excerpts from the diary of Dr  Emil Dorian the film seeks to reveal what life was life in the country on the small scale and the large.

Mirroring the work of filmmakers like Chris Marker who used a similar technique, DEAD NATION is at times a heady mix of words and images. However on a personal level the film never truly clicked with me. The problem was that I could not make the words connect with the image except fleetingly wit the result that this is a film I like more than I love. On the other hand I have spoke with a couple of colleagues who found the film rapturous since they connected with the film and what it is trying to do.

Despite my lack of emotional connection this is still a powerful film. The film's portrait of the antisemitism running through the country is often chilling because of the narrations you are there at tat moment description. Additionally when the word and image come together it is a powerful portrait of a country and a time and place most of us are not familiar with.