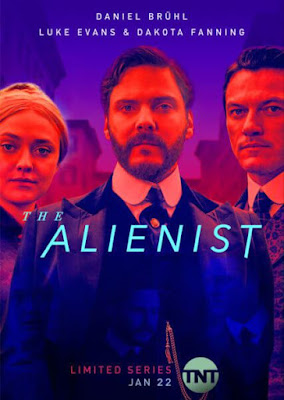 The adaption of Caleb Carr’s The Alienist by TNT is absolutely incredible. It is one of the most compelling TV shows I’ve ever run across. In actuality it is more like a film than a TV series. It’s so good that all I can say is you must see this.

Set in 1896 New York the series introduces us to Laszlo Kreizler, the alienist of the title. An alienist is what we essentially call a psychologist. With the science in its infancy people don’t know what to make of it or the people who practice it. They are not trusted by the police who feel a good beating is more productive than probing the mind.

Kreizler's‘s knowledge extends beyond just the mind and he is occasionally brought in by the police to help out. It helps that he is a fiend of Police Commissioner Teddy Roosevelt, but not much. When a young boy dressed as a girl turns up dead Kreizler is brought into the case by friend of the deceased. Sending John Moore his friend and an illustrator for the New York Times to the crime scene things quickly get out of hand as the death is revealed to be the work of serial killer with ties to powerful men in New York. Kreizler and his friends are put in danger since their investigation threatens to expose things best left in the dark.

The Alienist is a glorious piece of filmmaking. While the series has to be constrained by the limits of TV, the language, sex and violence is slightly restrained, the film still manages to deal with the dark places of the human soul. This is not just a murder mystery but a look at the class divisions of America and society. The socially “undesirable” are marginalized and abused. Women are abused regardless of their worth. Racism and anti-Semitism are rampant. While set over a century ago the film shows how the robber barons and their cronies of old are reflected in the current world order.

And I should apologize for bouncing between calling the Alienist a series and film. While it has hour long episodes making it a series, it flows like a film. The episodes flow one into the next with no attempt at recap. If you took out the black moments for the commercials it would just flow. The series is essentially a 10 hour film with an occasional break.

I love The Alienist. It’s exactly how I had the book in my head, or if not exactly close enough that it doesn’t matter. The film gets Kreizler and his team perfectly. They are a bunch a really intelligent characters who are given their chance to shine.

Why do I love the film so much? Because despite my being a fan of the book watching it I had no idea where it was going. I kept waiting to see what happened next despite knowing. That a film surprises someone who knows the story speaks volumes about how good it is.

To be honest I haven’t seen the whole film. I was only given access to the first two episodes but that was enough. Unless something goes horribly wrong this is my first great film of 2018. This is a must see.