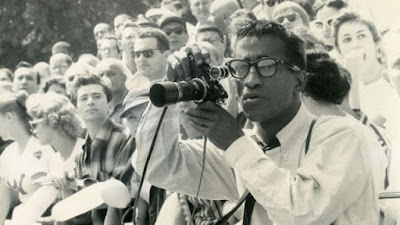 Sam Pollard's look at the great performer Sammy Davis Jr is a trilling watch. A look at the man's life through the ups and downs is going to make you want to keep watching and listening to Davis for days afterward.

Moving at a brisk pace the film covers everything you need to know about the man from winning a talent contest a three to upstaging Ethel Waters at 7 or 8, the seismic appearance with Eddie Cantor in the early days of TV  on to the Rat Pack, his political activism and his death. It's all here and it's all amazing.

As a life long Davis fan I was in heaven. My one regret is I never saw him live (I had saved for a long time to buy tickets to see him only to have illness take him). Seeing this film on the big screen was magical.You really get a sense of just how good he was and how he managed to help open the doors for those who followed him.

This is a great documentary whose only flaw is that even running 100 minutes is much too short to fully do Davis justice. Davis did so much that the film either can't cover it or breezes over it.

Still this is a must see and highly recommended. One of the Best films at the New York Jewish Film Festival

For tickets and more go here.
Posted by Steve Kopian at January 12, 2018