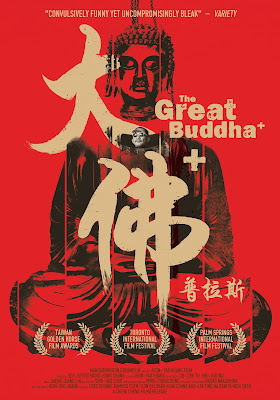 Black comedy of sorts has two guys on the fringes of society getting in over their heads after they see something they really shouldn't. Its a jet black film that will make you laugh and make you feel really uneasy for a long time after the credits roll.

Pickle works as a night security guard at a factory where Buddhas are manufactured. Belly Bottom is an unemployed scrounger who is his friend. They spend many nights hanging out and watching TV. When the TV breaks they begin watching the dash cam videos from Pickle's boss Kevin's car so they can hear/see his many conquests. One night they stumble on something in the videos that they can never unsee.

Shot in a black in white with only the dash cam videos in color (only rich people have colorful lives or Western style names) this is a film about down and out people who can't even get along. Everything these guy touch goes wrong- Belly Bottom can't even make money recycling because he is so small fry that his friend who runs the recycling plant doesn't see it as worth it to pay him for what he brings in. Its a horrible life and it just gets worse and worse.

Expanding his short director Hsin-yao Huang has made one hell of a film. Familiar in some ways to other moody independent Asian films, THE GREAT BUDDHA+ only seems it. Huang's spin on the nihilism (or at least "shit happens") existence is purely is own.  The mixture of dry humor, laugh out loud jokes and black outlook at life isn't something that we've seen before, at least not this deliciously blended. I felt really uncomfortable about the lives of the characters and their misfortunes, but at the same time I couldn't look away since I felt too connected to them to leave.

Gorgeously shot in black and white each frame is something you'd want to hang on the wall. The images are true works of art and suck us in to the story.

One of the things that makes the film work is that director Huang is part of the story. Speaking to us in voice over at almost the first frame, he appears now and again to fill in details or to give us his commentary on what is happening. Its a brilliant move especially in a film where the gods are invoked and wander about.

This is a great film and it's completely understandable why this film has won so many awards including 5 of the 10 Golden Horse Awards (the Taiwanese Oscars) it was nominated for, plus awards at the Toronto and Taipei Film Festivals.

Track this film down.

A VOD release is schedulded for February.

(Note: The "+" is part of the title. It is there to set it apart from the short film that is the source of the story)
Posted by Steve Kopian at January 23, 2018