The excellent animated noir HAVE A NICE DAY (2017) opens Friday 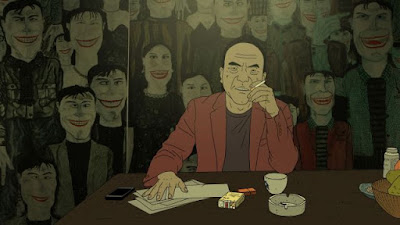 Liu Jian's animated film noir is already in trouble with Chinese authorities. Pulled from festivals the film has people in power upset with it's less than flattering portrait of life in China.

Xiao Zhang steals a bag of money from a crime boss and is in turn chased but the boss's fixer. However things become complicated when an inventor ofr x-ray glasses and a couple looking for Shangri-la get involved.

Visually audacious film is a kick in the ass. A neon colored neo-noir film which isn't afraid to pause for some odd ball asides it's the sort of film that one up Tarantino and dares him to try and top it. A wonderful mix of low key Chinese crime mixed with an out there sensibility the film is a must see for anyone who wants something off the beaten trail.

The film is an absolute delight.

At the same time I'm going to be very curious how this film plays down the road since having seen the film and have been pondering it for several hours I'm left to wonder how this will play once you've seen the flash since underneath it all it is striking me as a run of the mill crime drama.

On the other hand- that first time through this film is freaking awesome and the ride it gives is highly recommended.
Posted by Steve Kopian at January 22, 2018