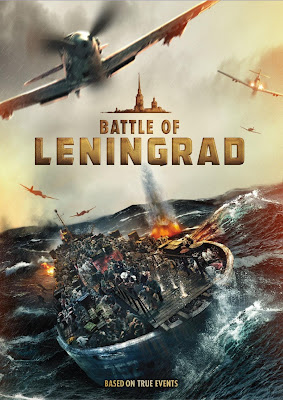 BATTLE OF LENINGRAD is misnamed. While it is better than the alternate English title SAVING LENINGRAD which was used for the European release, it is still not quite accurate since it's not really about the battle, though there are war scenes, but about one tragic incident in the evacuation of the city.

The incident here is the Barge 752 incident which is the story of what happened when an old rickety barge was lover loaded with people and equipment. The captain of the barge said it could at best hold 600 people safely so that if the sea turned rough the barge wouldn't break apart and sink. The officials put over 1500 people on it plus cars, equipment and even a piano. When the weather turns bad the barge floundered. Unfortunately before help can arrive the Germans find them and bomb and strafe them to the bottom of the sea.

This is a good historical drama/action film. While there is a kind of throw away romance at the center with political overtones at its center to give the film a beating heart, the real meat is the extended battle scene as well as the gripping tragedy at sea where the weather turns bad and then the Germans show up. The sequences are absolutely amazing and the reason that you want to see the film because they are absolutely incredible. (Trust me I was given the Blu-ray ro review and I'm going to go back and just watch those sequence isolated to figure out how they did it all.

As good as most of the film is I am not sure what I am supposed to get out of it. Its a strangely "rah rah" old school propaganda film about how mother Russia will go on and be saved even when bad things happen. To me it's a weird ass idea to turn a horrible tragedy where a thousand or so people died into an uplifting feel good we will go on story especially since the ones in power were the ones responsible for the death and destruction.  it's almost like- sure we'll kill most of you all but some of you will survive and that will make us stronger. I felt like I was being lectured to.

Still there is something about the power of the film that grabs you and drags you along. All my reservations about the film kind of fall by the way side by the pure visceral power of the last hour of the film.. Very recommended, especially on a big screen.

BATTLE OF LENINGRAD is released on Blu-ray, DVD and digital platforms on 12/3 from MPI Media
Posted by Steve Kopian at December 01, 2019