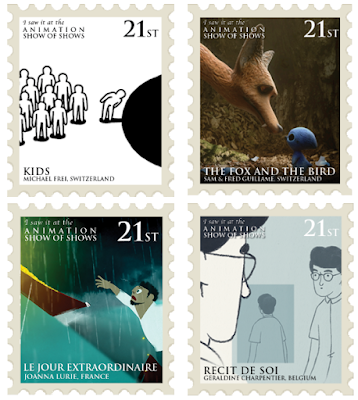 The ANIMATION SHOW OF SHOWS has returned with it's 21st annual collection of animated treats around the globe. Its tough enough to get one collection of quality shots together but the fact that the they have consistently done it for 21 years is truly amazing.

This year there are 8 animated films and 2 documentaries on the filmmakers. Three of the films (†) were in the Oscar hunt with only DAUGHTER making the Short List. While some years you could argue that the films won't lose anything not being on the big screen, this year there are some that are the right kind of overwhelming when seen big.

Before I talk about the individual films I do want to say that over all the collection is solid. While not for small children, some of the films deal with heavy subjects like death, growing up and peer pressure, all of the films will be fine for older kids and adults.

Kids - Michael Frei, Mario von Rickenbach, Switzerland
If you need an excuse to see this collection on the big screen this is it. A stunning black and white look at per pressure and kids being kids, and the way society works this film is as visceral and experience as you are likely to have in the cinema all year. We watch as kids run and play and get bounced around and literally push each other into doing things. Words can not describe the way you feel watching this film. I got lost in it and drifted off in the various patterns that repeat and change and repeat.  One of my absolute favorite films of 2019.

Rubicon - Gil Alkabetz, Germany
How do you get a sheep, a wolf and a head of lettuce across a river one at a time so that they don't eat each other? Weird mind game drifts off in delightful surreal territory as the repeated trips go into Looney Tunes direction. As delightful as it is, the film is actually a meditation on the Oslo Accords, specifically the difficulties in having them come about. Knowing that changes the balance of hat we seeing and gives weight to the madness.  A wonderful little film I can't wait to share simply because it is a delight.

Portrait of Gil Alkabetz (Rubicon) - Marta Trela Germany
Great short look at the director of Rubicon is also a painful experience since the film shows us other examples of his work that are so good looking that I have to try and track them down now. What I love about the film is that it not only explains Rubicon but also Gil Alkabetz's work in general which gives us a greater understanding.

Five Minutes to Sea † - Natalia Mirzoyan, Russia
A young girl is told sh has to wait five minutes before she can leave the beach for the water. We then see the world from her perspective as she waits for time to run out. Beautiful painted film has some magical moments (Moving people by straw for example). A small gem of a film will delight you.

Récit de soi (Self-Narrative) - Géraldine Charpentier, Belgium
Excellent animated documentary has a Trans man talk about his life and transition. This is a wonderful film  that really should be seen by as many people as possible. It is many things including an explaination of why representation in the media is important.

Le jour extraordinaire † (Flowing through Wonder) - Joanna Lurie, France
You need to see this film of a ceremony at sea on a big screen. The stunning visuals and crashing audio is truly something to behold on a big screen. Films like this are why animation is a necessary art form to tell some stories.

Hounds - Amit Cohen, Ido Shapira, Israel
Exploration of how we grow up and are forced to break with our families in order to find our selves. The story of a domesticated dog who begins to run with some wild dogs is done in stark black and white that sets an ominous mood.

Portrait of Amit Cohen and Ido Shapira (Hounds) - Shlomi Yosef
Weakest film in this year's Show is a puff piece that simply explains things about Hounds that we could see for ourselves from the film.

The Fox and the Bird (Le renard et l’oisille) - Sam & Fred Guillaume, Switzerland
One of my favorite films in the Show reduced me to a sobbing mess as fox finds and egg and unexpectedly becomes a parent. Stylized characters wander through a photo realistic forest  with the result there is a heightened nature to the the tale. Deeply moving.

Daughter † - Daria Kashcheeva, Czech Republic
Father and daughter try to reconnect during his hospital stay- both remembering the same incident from years before. This is a sweet little film that has an unexpected kick in  the ass emotional ending. It is a nice way to end this collection of films.

THE 21ST ANIMATION SHOW OF SHOWS starts Wednesday at the Quad in NYC while continuing across the country (for theaters and show times go here). 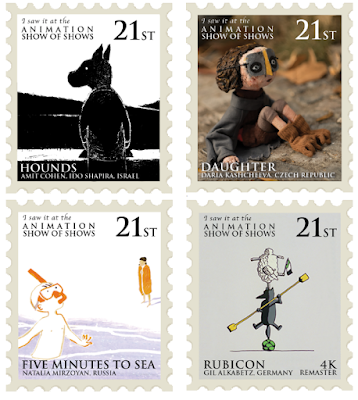