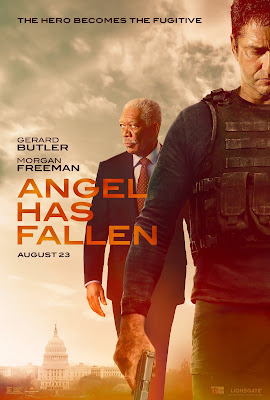 Third film in the "Fallen" series starring Gerard Butler and Morgan Freeman is less action packed than the previous films but strangely better.

This time out the film had Butler struggling with the after effects of all the action. The concussions and the explosions have left him dependent upon pills. His friend (Danny Huston) has reconnected with him after a long time away. One day while protecting the president there is an attack. The president is left in a coma, Butler is injued and sent to the hospital, where it is discovered he is “behind” the attack. it is a set up by his friend Huston who is working for another. This sets Butler on the run to clear himself and keep the president safe.

More character driven than earlier films this is an unexpected delight. After the mess of London is Fallen which had great action and literally no plot, its odd to find a film that is character driven. Butler is a broken man, his battles have left him unable to perform and it is strangely refreshing to see a series note that what the characters experience hurts and breaks the body. The action is really good and it helps that all of the characters are well drawn so the ups and downs have weight.

What thrilled me most is Nick Nolte in an Oscar worthy turn as Butler's long lost father. Butler has avoided his dad for years and he only turns to him because there is no one else. The rebonding between father and son is great which brings up the first of two rip your heart out scenes from Nolte whose face cracks when he finds out his son is married and he has a granddaughter- oh the things he missed. It is matched by Nolte meeting his daughter in law and grand child for the first time.

Is this high art? Oh hell no, but it is entertaining and unexpectedly weighty

Recommended- nor not only the action but the certain to be Oscar snubbed performance of Nick Nolte
Posted by Steve Kopian at December 19, 2019