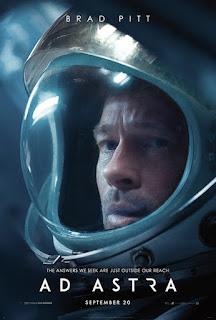 Astronaut goes to find his father in the far reaches of the solar system after a mysterious pulsing energy is traced back to his secret mission. Adventure ensues.

I am not sure what I think of this film. A kind of intergalactic Heat of Darkness melded with a western and questing tale this is one of the best looking films of the year. It contains some of the best looking sequences I've ever run a cross but I'm not certain it adds up to much. Don't get me wrong I was enthralled for most of the film but when I got to the end I was a little disappointed.

Thinking about it some 24 hours after seeing it  I think the problem is not so much the fact that this is a simple story, more that James Gray has wrapped it in such pretty packaging that nothing at all could have live up to the build up except something truly huge and massive, instead of what amounts to a a small human moment.

Regardless this film gives us a lot to chew on philosophically and the visual stun so it is recommended.

Any discussion as to whether it will be considered a classic or even remembered in years to come will have to wait at least five years time.
Posted by Steve Kopian at December 13, 2019