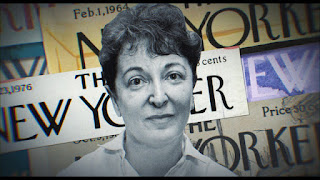 This is a celebration of the work of film critic Pauline Kael, who influenced not only generations of writers but filmmakers and the tastes of audiences around the world as she championed some of the greatest filmmakers we know today.

I truly don’t know what to make of WHAT SHE SAID: THE ART OF PAULINE KAEL. It is not that the film is bad but the damn thing is so sweet and saccharine in its affection for Ms Kael it shot my blood sugar levels to dangerous heights. It is possibly the most hagiographic films I’ve ever seen that wasn’t produced as a promotional film by a corporation. Kael, to the filmmakers and everyone in the film, was the be all and end all of film criticism, which may or may not be true. She certainly was a breath of fresh air in the male dominated business which more often than not took great pleasure in destroying films and careers.

While I love the discussion of Kael and her writing the film kind of seems empty beyond that. I really don’t have a sense of her as a human being. While her writing is what she chose to put forward there is much more to her. Frankly I feel I had better sense of her as a person from BIG JOY the film about her husband poet/artist/ filmmaker James Boughton. Without the real sense of the person doing the writing I feel I would have been just as happy sitting down with a book of her writing, especially since so much of it is quoted.

For those who are interested in film criticism this is worth a look, other others, less so.