The Disappearance of My Mother (2019) opens Friday 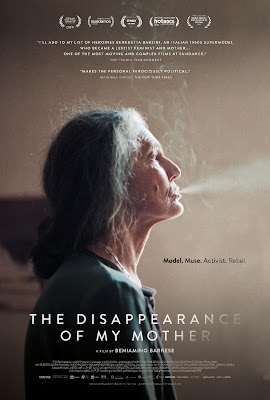 THE DISAPPEARANCE OF MY OTHER is a great film. It is an unexpected delight that has haunted me in the weeks since I saw it. It is the sort of film I wish I could have made about my mom.

The film is a portrait of former fashion model, Marxist and educator Benedetta Barzini by her son. Made because his mother is constantly talking about going away to an island where there is no one, no credit cards, no money, and no computers, it is an effort to come to terms with his mother and her impending “disappearance”.

Raw real and extremely intimate, this is the sort of a film only a mother’s son could have made. Partly because he is the only one who would be bold enough to shoot his mother at times we would never want to be filmed, but also only a mother would allow her son to shoot her at those times. Yes she complains about being filmed while she sleeps, but she still allowed the footage to be shown. This is a film that feels exactly what it is, a mother and child hanging out and talking about her life and we are better for it.

I love this film. I love how we see the love between the pair. I love how we see the cranky mother not being sure why her son is making a film or why she is a getting an award. More I love the moments where the mothers mask falls and we get moments of pure joy. For example the moments where director Beniamino Barrese films his mother in the court yard of her home. She poses as he whizzes around her. There is a wonderful life in her eyes and smile we rarely see these days.

What makes this film shine is that despite being a lovely portrait of feisty woman it is also a wonderful mediation on mothers and sons, of growing old and living on our own terms. Barzini has lived life on her own terms. She did what she had to and she will stand for nothing less than her way. She is a kick ass woman of the highest order. She is a kind of example of the sort of person we see too rarely

This is a must see film. One of the best films and one of my favorites of 2019 and an absolute must see.
Posted by Steve Kopian at December 03, 2019