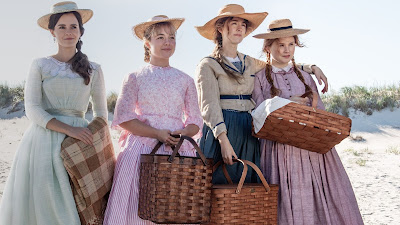 With all the reviews of Little Women going up a month before it’s release I am going to add my thoughts as well. I know the vast majority of the readers don’t care about the big films unless they are at a festival well before the theatrical release.

In fairness I saw the film in July way before anyone else at a screening where I we were told the film was done but they were waiting for a score.

My reaction was I thought it was Oscar worthy. I pretty much loved the entire film with one notable exception. As someone who pretty much had no desire to ever see any version of the story ever again I found that my love of the film completely unexpected. This is a beautifully made film that will appeal to pretty much everyone- even some of my cranky friends who are like I was and had decided the last thing we ever needed was another Little Women adaption.

As for the one bad thing in the film it is, surprise, Meryl Streep, who not only over acts to the point of being bad but made to look as if she is about 150 years old. Certainly way too old to be the sister of the girl’s father. While I would have loved to remove Streep from the film the fact her character is vital to the plot makes it impossible (Yea she really is that bad)

Ultimately this is great little film. It’s one of the best big studio films I’ve seen. Recommended
Posted by Steve Kopian at December 12, 2019