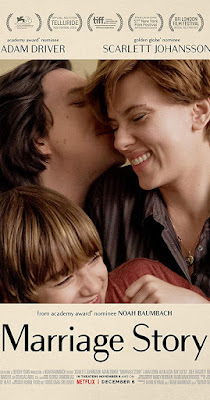 Two years ago after attending the debut of Noah Baumbach’s The Meyerowitz Stories at the New York Film Festival, I spoke with one of my fellow critics about the trajectory of the Brooklyn auteur’s career. The topic soon turned to Lady Bird, the directorial debut of Baumbach’s wife and frequent muse Greta Gertwig, a film which hadn’t been released yet but had generated enough buzz at early screenings to raise more than a few eyebrows. I joked that if Gertwig’s film made more money and won more awards than Meyerowitz he’d probably get divorced in a huff. Lo and behold, Lady Bird did just that, becoming not just one of the best films of 2017 but ending up on many critics’ shortlists for best of the decade. Meanwhile Meyerowitz, which was a good film but not a great one, quickly vanished at the end of the festival cycle.

And while Baumbach surprisingly did not get divorced, he did the next best thing: he made a film about it. Entitled Marriage Story, it’s one of the most incendiary and devastating ever made about the subject, one that seems a direct response to arguably the masterpiece of the subgenre, Robert Benton’s Best Picture-winning Kramer vs. Kramer (1979). But whereas Benton’s film exclusively focused on the husband’s POV and depicting the wife as selfish and antagonistic, Baumbach took incredible pains to make his film as fair and balanced as possible. The sins and virtues of both parents are collected and presented like weights on a scale: Charlie Barber (Adam Driver) is attentive and neat, but he’s controlling and had a one-night affair after a year of emotional and sexual starvation; Nicole Barber (Scarlett Johansson) is patient and loving, but she escalates the divorce proceedings by violating their agreement to keep things civil by hiring a high-powered lawyer (Laura Dern in a ferocious, scene-stealing performance) to bleed him dry via character assassination. Both sin and are sinned against, but ultimately both are exonerated by the film’s central thesis that the parasitic divorce industry is what turns otherwise amiable couples into monsters.

Baumbach has made a career doing films about selfish, dysfunctional families, but Marriage Story is easily the most accomplished—its script could be taught in screenwriting workshops, its mise-en-scene in directing classes, and its philosophy towards forgiveness in the face of brokenness and woundedness in the pulpit.