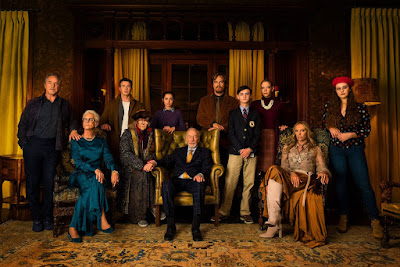 Agatha Christie never cared much for people. Neither did Patricia Highsmith, for that matter, nor Dashiell Hammett nor Raymond Chandler. The great murder mystery writers viewed humanity with a detached cynicism; how else could they spend their lives in the heads of maniacs who kill for madness, money, or pleasure? Rain Johnson’s superb thriller Knives Out is an unapologetic love letter to these titans of mystery fiction.

But occupying its center is one of the great aberrations of the genre: Marta Cabrera (Ana de Armas), a character who acts and wins not because she’s the smartest person in the room nor the most ruthless. Instead, she succeeds simply because she has the kindest heart. The opening thirty minutes sees her pulled into the center of a murder investigation when her client, wealthy mystery novelist Harlan Thrombey (Christopher Plummer), is found dead under suspicious circumstances. What’s worse, the entire extended Thrombey family—a motley assortment of rich, eccentric sociopaths—turns on her when it’s discovered that Harlan bequeathed all his assets and belongings to her after unexpectedly disinheriting them. Make no mistake, Johnson’s idols would’ve viewed Marta with contempt. For one, she’s innocent. For two, she’s biologically incapable of lying, the mere thought of which makes her projectile vomit. For three, she earnestly wants to help people, even the extended Thrombey clan that threatens to have her mother deported if she doesn’t surrender Harlan’s assets. Yeah, she’s exactly the kind of character Tom Ripley would’ve leeched off and killed or found murdered in an alley by Sam Spade. But this is the film’s true coup—she’s an affirmation of human goodness in a world without a moral compass.

There are many amazing things to recommend Knives Out: one of the tightest screenplays of not just 2019 but of the entire decade; an ensemble cast of Hollywood A-listers (Evans! Collette! Curtis!) and seasoned character actors (Walsh! Oz! Callan!) all clearly having the times of the lives; Daniel Craig’s revelatory turn as Detective Benoit Blanc, a deep-fried Southern private detective part Colonel Sanders and part Foghorn Leghorn. But it’s Marta Cabrera that makes a great piece of entertainment into an essential statement for our times. It’s tempting to compare it with Bong Joon-ho’s Parasite, another class-divide thriller. But whereas it judged rich and poor as equally cruel, this one sees a redemptive good in at least some of us.