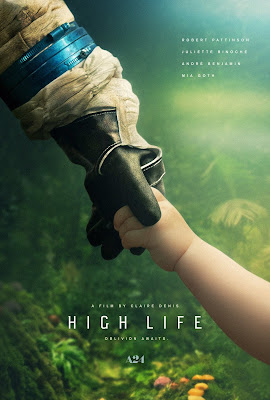 Told in a jumbled fashion to hide the fact that the central story makes no sense except to the Denis who is merely using the framework to work out some not particularly well thought out thematic ideas.  The story and themes are similar in some ways to Piotr Szulkin's GA GA GLORY TO THE HEROES which has convicts being sent into space for nefarious reasons, but where Szulkin seems to have solid reasoning for everything, Denis has a sketch of an idea and some cribbed references from other better science fiction films.

Strangely the low fi, low tech feel of the film is closer to John Carpenter's DARK STAR about a lost space ship blowing up unstable stars. Carpenters film scores over HIGH LIFE in two key ways, first it is funnier and second it better thought out. Even allowing that it came out before it, at least Carpenter's film also doesn't steal an ending from Disney's ridiculous BLACK HOLE and try to sell it to us with a straight face.
Posted by Steve Kopian at December 26, 2019

Email ThisBlogThis!Share to TwitterShare to FacebookShare to Pinterest
Labels: not worth the effort, science fiction