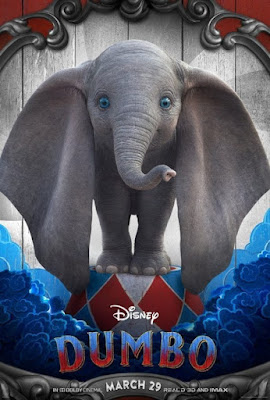 Vile retelling of the classic tale is one of the ugliest Disney films ever made. It is a nightmare concoction that if I had children I would prevent them from ever seeing.

The film tells the story of ex- horseback rider (Colin Farrell) who returns from the first world war minus an arm, His wife has passed and his kids were looked after by the circus performers. With his horses long sold he is put in charge of the elephants, one of which has given birth to one that will become Dumbo. When word of the flying elephant reaches Coney Island, a grand theatrical showman goes to the circus in order to buy Dumbo for his own ends.

Maintaining most of the classic scenes and even most of the music cues, there is a great deal that the film gets right. Unfortunately the film also contains an endless string of ugly abuses perpetrated by the villains of the piece, first a a roustabout who is eventually killed by Dumbo's mom, then the audiences at the circus performances who torment it and lastly by Michael Keaton's theatrical producer who is just a monster. Never mind that this is nominally a kids or family film the ugly abuse directed at the (CGI) animals  and other humans is deeply disturbing. (Mad killers in violent horror films are not this evil) Even arguing that was the way things were 100 years ago when the film is set doesn't account for it. There is an ugliness that is is at such a level that I have to wonder why they felt the need to be that dark.

I am left to ask Who did they make this film for? Not for kids since despite the small children who are Dumbo's friends and the primary human characters, what is going on around them is ugly and likely to induce nightmares. While I know world wide the film covered cost, I suspect the ugliness of the film kept it from doing so in the US.

Well made with some great looking sequences and great CGI the dark atmosphere makes this a film I can't recommend to anyone for any reason.
Posted by Steve Kopian at December 15, 2019

Email ThisBlogThis!Share to TwitterShare to FacebookShare to Pinterest
Labels: fantasy, not worth the effort, remake