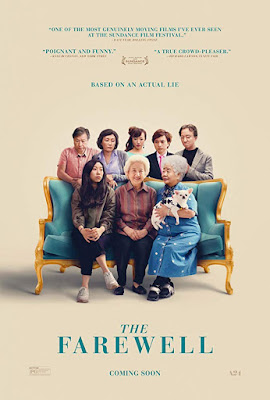 Awkwafina stars as New Yorker  who travels back to China to see her grandmother one last time under the guise of attending her cousins wedding.

Certain to be Oscar nominated film for Best Picture and Best Actress THE FAREWELL is a deeply moving family story about life and family and the things we do because we love them. Make no mistake the film is as good as you've heard and it is full of very funny moments as well as any number of ones that will have you reaching for a tissue.

I know I am late to the game but I only just saw the film on VOD. Part of the reason was opportunity and partly I wanted to stay away from the film until I could see it in isolation for what it really is- which is excellent.  Frankly this is the sort of great film that mainstream Hollywood and mainstream critics would have avoided had it not been hyped for its director

What irks the hell out of me is that despite being one of the best films of 2019 the only reason that the film is on anyone's radar is simply because it was made by an Asian woman. Had Lulu Wang not been the director I doubt very highly that most of the mainstream would have ever noticed it. I know that had the film come from China or Taiwan with out the connection to America almost no one would have given it a second look despite it being a truly great film. What I find bothersome is the fact is Lulu Chan's experience is not being used to put the film in proper context but rather to sell it as a novelty. Filmmaker's backgrounds should inform the audience as to what the film is and not be used simply to sell the film.

On the larger stage the fact that the film was sold as a Chinese American tale in a way completely negates what makes this film so great on every level and that this is not just a Chinese story but a simply a family story. If you strip away the specifics of  the Chinese culture what remains is a family that is dealing with the impending death of a loved one on the far side of the world. The truth it speaks are universal not specific (something the stories of all great films do) and so it crosses generations and cultures to speak to the greater human condition.

What Lulu Chan has done is simply made a truly great film by simply speaking her truth.  It is a truth that will allow the film to thrive for decades to come
Posted by Steve Kopian at December 16, 2019