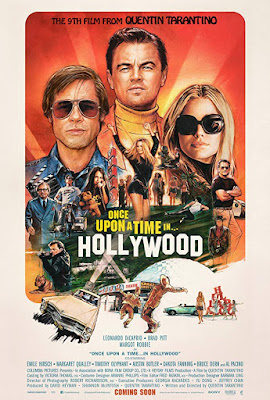 Quentin Tarantino re-imagines the Hollywood of the 1960's in an over long over indulgent meditation of nothing. Despite being well-made it is the least film that Tarantino has made to date.

The film has a declining TV star played by Leonardo DiCaprio limping along career-wise. Refusing to go to Italy to make westerns (ala Clint Eastwood and many others) he finds his roles reduced to TV guest shots. Brad Pitt plays his stunt double who has been blackballed for fighting with Bruce Lee. DiCaprio lives next door to Roman Polanski and it all takes place in the days before the Manson murders.

Dreadful bad TV recreations mix with long rambling scenes of life, driving to the sound of exploitation radio commercials and flashbacks to make a mosaic that doesn't add up to much.  What am I supposed to get out of yet another endless cycle of Tarantino's pop culture references? I'm not certain. More so since he alters history all along the way, making any real world connections pointless. I kind of thought that there might be some sort of summation with the Mason family wandering around, but Tarantino rewrites events by having the attackers end up at the wrong house where Brad Pitt and his dog tear two of them apart and DiCaprio torches the third with a flame thrower. The alleged death of old Hollywood is revealed to something else.

While I will not fault anyone who likes the film for itself, there are after all some great bits here, I will wonder about anyone who suggests that Tarantino has made a deep and meaningful film, because that simply isn't the case. There is nothing here except some really good bits that don't connect thematically to any other and worse never come together in a way that justifies the extreme length. (And to be clear I don't think he's made a complete meaningful film since JACKIE BROWN- he's just gotten more self indulgent and referential.)

One of the biggest nothings of the year.
Posted by Steve Kopian at December 27, 2019

Email ThisBlogThis!Share to TwitterShare to FacebookShare to Pinterest
Labels: ambivalent post, american, historical drama, not worth the effort