Chinese Portrait opens Friday at the Museum of the Moving Image 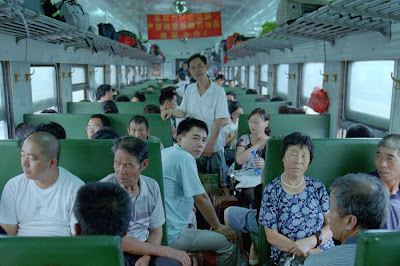 CHINESE PORTRAIT is a series of long takes of various places around China. Some of the pictures have people posed with in them as if it was a portrait, some are simple shots of streets, work places or fields where life is happening. It is a big screen moving picture album of a country at a certain moment in time.

You are either going to be enraptured by this film or bored by it. That is not a knock on the quality of the film, rather some people need explosions and not fields of horses or people standing outside a mine waiting for carts to come out. I was at first unsure of what I was seeing and then I fell into the film and wondered what the next moving slide was going to be. I also stopped watching the people in the foreground but I became curious by the background. Cars on a street, People wandering around, the things on monitors in work places. I found I wanted to climb into the screen and look around.

Beyond that I don’t have a lot to say except there are a couple of observations. First I want to go back and see the film again, not so much for the long shots but for the odd fleeting moments that seem to have been inserted as mistake or as if the film is a home movie and we got a random shot where someone hit the record button for a second or two when it was randomly pointed. Secondly I am curious why the longest sections of the film involve people praying. The religious or meditative sections seem to be twice as long as the others parts. I am not sure what it all means but I am curious. Again I need a second viewing.

As it stands now CHINESE PORTRAIT is a visually engaging film for those who want to go some where else but not leave home. It is a kind of giant found footage film of life in China and is recommended.

For information on the screenings at the Museum of the Moving Image go here.
Posted by Steve Kopian at December 11, 2019