Douglas McEwan's WE BELONG DEAD: A GAY PERSPECTIVE ON THE CLASSIC MOVIE MONSTERS 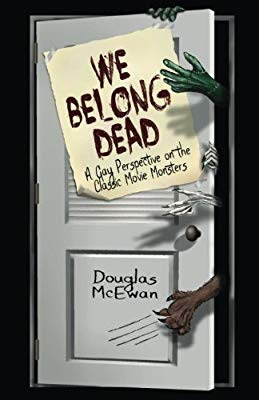 Writer Douglas McEwan's We Belong Dead is often screamingly funny. A radical rethink of the horror films from the 30's and 40's by a wickedly funny writer who explains that they are all gay allegories will have classic film fan in stitches.

McEwan's approach is to give us the plot, explain what's good or bad and then explain why the films are gay. It's simple and direct and allows him to riff on plot points, source novels the previous films, the making of the films and Hollywood history. Even I, a life long lover of the films found much I didn't know (Karloff great aunt was Anna of the King and I).

As for McEwan's insistence that the films are gay, I think he is right on target in some cases and off base in others. Not that he cares, as he says early in the book it's his and and can do what he wants.  The takes are how he has seen the films his whole life, from when he realized he was gay until now. I won't go into how why he feels each film is gay, that would removes so much of the fun, however I will warn you that you will never see the films the same way again, especially the blindman sequence in BRIDE OF FRANKENSTEIN. You will not be able to shake what he tells you, which odds are will make you love the films all the more.

I love this book. Not only is it s great histoy of the films, and a loving homage to them, but it is also damn funny for all the right reasons.