Three books to spend your holiday loot on- THE LAW IS AN ASS: ALL RISE, MONSTERS AMONG US and AMERICAN FUNNY ANIMAL COMICS IN THE 20th CENTURY 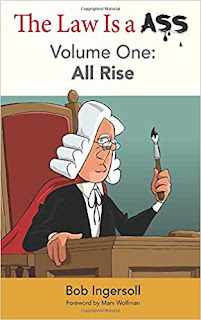 THE LAW IS A ASS: ALL RISE
The first in a series of books collecting Bob Ingersoll columns from the comic Buyer’s Guide on the law in comics.Ingersoll is an attorney and huge comic fan who was getting annoyed by how most comic writers get the law wrong. From the problems of having some one like Batman testify while masked, to putting the Flash on trial for a justifiable killing to trying to figure out how a textbook arrest could ever go south Ingersoll dismantles the misuse of the law with wit and humor. Reading the book I was roaring with laughter on almost every page since as someone who works with law enforcement I could recognize many of the mistakes made but never thought about any of thm.

To be honest you don’t need to have an interest in comics and the law to enjoy the books in the series, you simply need a love of comics and laughing because Ingersoll is a funny funny man and his insights will make you laugh even as they are making you learn something.

I can't wait to read the next volume. 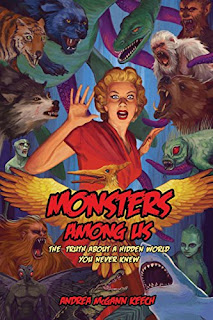 MONSTERS AMONG US : THE TRUTH ABOUT A HIDDEN WORLD WE NEVER KNEW
Andrea McGann Keech's ‘s book on the weird monsters that are supposed to wander the world is a fast and breezy read. Taking on creatures from Loch Ness’s monster, to bigfoot, the yeti, to globsters to the Nandi Bear, the Wendigo and many others in brief and to the point chapters give the reader enough information to get them on the road to being a cryptozoologist. While the book is not the be all and end all on the creatures, there is way too much material out there on pretty much every creature covered to the point the five to ten pages on each is just a taste, it is a perfect place to start.  As some one who has love weird beasts all my life it had me cracking open my books to deeper diving on some of the beasties.

A recommended primer on weird monsters. 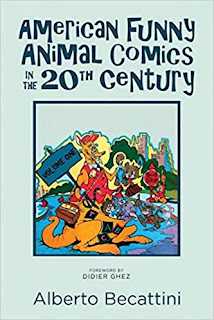 AMERICAN FUNNY ANIMAL COMICS IN THE 20th CENTURY
I can’t even begin to do Alberto Becattini's two volume look at cartoon  animals justice. A stunning look at animal in comics and animation the book has more information than you can imagine (or I ever hoped to find in one place). To be perfectly honest I was taken aback by the books which I thought were simply going to be a guide on the order of an encyclopedia listing characters and sources, instead what I found was it was a detailed discussion of the subject that is detailed and engaging. Each chapter had be popping on to the internet to deep dive on each character and subject. Frankly I have a couple dozen books on the subject but there is so much here I never knew. Wow, wow and wow. If you are a fan of cartoon animals, of cartoons in general or comics you must read these books because they will connect up things you never knew were connected and open doors you never knew needed opening.

All three books are published by Pulp Hero Press, sister company to Theme Park Press and are available at Amazon both as hard copies and e books.
Posted by Steve Kopian at December 29, 2019