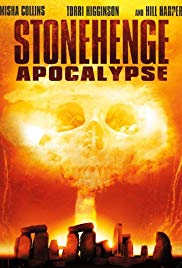 It seems there are some sort of tunnels under the pyramids. As the explores fumble around they unwittingly set off the mechanism that created life on earth centered on craziness at Stonehenge and other megalithic sites around the world.

It makes no real sense (I mean pyramids transforming into super volcanos?) but it is sold well enough by the cast that you are going with it. Actually Other than the tunnel stuff the whole thing looks and sounds good enough that I was hooked and willing to go with it where ever it was going. More importantly I liked it enough that I told a couple of people that this was a small scale popcorn film worth their time.

Is this the greatest thing since slice bread? Oh hell not but if you like the well done genre films, more serious and better produced than some of the silly Syfy originals, Stonehenge apocalypse is worth a shot
Posted by Steve Kopian at December 08, 2019