Thoughts on Star Wars: The Rise of Skywalker (2019) (SPOILERS) 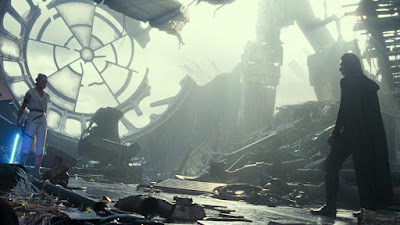 Final film in the Skywalker saga (for now) is out and I've seen it and I am mixed.

Truth be told I don't have problems with the plot, more with the story telling.

The plot has what's left of the rebellion trying to figure out how to defeat the rising old Empire. It seems the long dead Emperor has used Sith magic and science to bring himself back for an evil purpose- which involves Rey. Meanwhile Kylo is still trying to hunt her down-more so after a talk with the Emperor.

That's enough to get you started.

Great looking film hits many of the right notes. Storylines are tied up and the saga is put to bed for better or worse. I honestly don't have any major plot quibbles, other than the film's sense of time is cocked up with things happening in ways they shouldn't- like look how much they do in 16 hours. While I can bitch about some things I suspect the problem is in the editing and if this ran at least 30 minutes longer it would have worked better.

My problems are entirely with how the choices and how things are put together.

And at this point I need to warn you that SPOILERS are ahead- so proceed with caution.

The first of my problems is that for most of the first half of the film things just happen. The characters move from place to place  not for any real defined reason but because they have to move people around.  There is exposition and motion but zero emotion. It's like watching a film on fast forward as we see what everyone is doing but nothing has any weight. Any real character building gets lost.

The next problem is that for a chunk of the film there are no characters. Yes, at the end you see Rey and Kylo arc in the last third but most of the time you just see events happen as the characters are moved around. Once the plot becomes more centralized the characters begin to appear but Finn and Rey and Poe are just moved about. Rey is just pissed for most of the film and Kylo is fawning. The result is sequences like the battle in the sea looks spectacular but most of it has no weight.(and notice I said most)

I absolutely hate that Rose is lost in the shuffle. She is given almost nothing to do and it hurts after two films worth of build up. It is almost as if JJ Abrams decided to cave to the people who hated her. Othe characters are barely there as well.

And that's another thing that pissed me off - the film plays it safe and echoes way too much of the earlier films. In making the film plot threads repeat and choices are meant to make fanboys yelp- such as Luke's X Wing. Abrams tries to fit references to everything into the film when it isn't needed.  Must we have the Ewoks and the lightning? Must the saga end where it begins? Why didn't they completely go in new directions instead of hitting the old familiar places.

As for not playing it safe the filmmaker's wuss out and try to have it both ways- they kind of kill off two characters only to cheat and bring them back- Chewie was not on the transport and C3PO's memory had been backed up.  For me Chewie's demise didn't feel like anything because of the lack of character building previously. He was barely there as anything other than window dressing. As for C3PO's mind wipe- It was powerful  moment that had me tearing up at the heroic nature of it. However a groaned when a short time later R2 restores it. There are other choices- such as pretty much keeping every good guy alive- that they shouldn't have made.

And yet I was moved. Parts made me tear up for the right reasons.The over all direction of the story was right on. I was moved by Han's cameo and the use of the Jedi voices at the end. I loved Lando. I think Kylo's choice works. R2's and Chewie's reaction to the death of Leia is heartbreaking and dead on right (and what Han's death should have been)

Is the film perfect? No. It's too short and too safe but it brings things to a nice conclusion- or if not a conclusion- a place the franchise can move on from (because as I write this there are rumors of more to come).