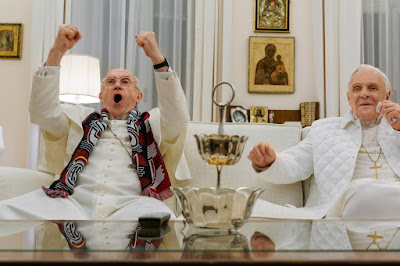 Fernando Meirelles’ THE TWO POPES is on of my favorite films of 2019.

The film is the story of  meetings between the current Pope (Jonathan Pryce) and his predecessor (Anthony Hopkins), the film charts the discussion between two men who are having crisis of faith. Pryce is tired and wants to retire. He feels hes done all he can and would be better just being a parish priest. Hopkins' is being rocked by scandal, but worse he can no longer hear God. He needs guidance so he decides to talk to the man who almost became Pope in his stead.

What starts out as a chess match of sorts, Pryce just wants out of Dodge and Hopkins won't let him go, nor will he tell him why, becomes a discussion of believe, God and how life is long journey of correcting wrongs and asking forgiveness.

I was moved to tears as the men's crisis of conscious mirrored my on in some ways.The performances are career cappers for both Hopkins and Pryce who give what maybe their best performances ever. This is as good as film acting gets. (And if the film doesn't address all of the sins of both men, it does address some, though this isn't that straight biography but a meditation based on actual events)

If there is any flaw it seems to be Pryce has been noticeably dubbed when speaking Spanish and it looks wrong.

CUrrently on Netflix
Posted by Steve Kopian at December 24, 2019