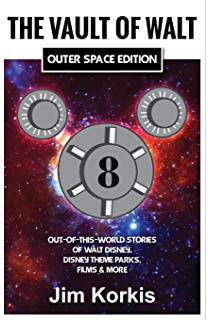 One of the best books in Jim Korkis' Vault of Vault series deals with the projects relating to space that the Disney Studios have touched. From detailed examination of the legendary Man in Space TV show episodes to seeming missteps of TREASURE PLANETand the BLACK HOLE to efforts to keep Tomorrowland current to a run in with Osamu Tezuka and Dr Who, this book is stacked.

Okay a quick warning don't buy the book just for the Tezuka or Dr Who chapters- they are each only two or three pages in the final section of quick stories.  You want to buy the book for the rest which is choice.

I loved this edition a great deal.  While my love for the Tomorrowland  chapters was not high, owing to my doing a great deal of reading on the theme parks over the last few weeks, I did love the rest of the book for all sorts of reasons.

I love that the Man in Space episodes took me not only behind the scenes of the TV show but also the space program as well. This was not the result of Disney working with the government as such but more that he ended up talking with the right people before they stepped out on the stage.

The two chapters on the failure of TREASURE PLANET and the semi-success of THE BLACK HOLE make for great reading. Personally I always find it interesting to go back and look at films that made impressions, for good or bad, decades later when time has washed away the hype and we can see the films for what the are.

The MOON PILOT chapter was a blast since it talked about a film almost o one talks about, as well as discussing the problem that the FBI hated the film and how that effected how the agency saw the studio.

And then there is the final section of delightful short bits where the Japanese Disney met the man himself and a certain time traveler almost ended up as a Disney character.

I was in heaven from start to finish.

If you love Disney Vault of Walt  8, like the rest of the series is a must.
Posted by Steve Kopian at December 05, 2019