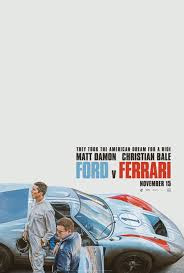 Burned by Enzo Ferrari’s playing the Ford Motor company to get a higher price for his company and a deal that kept him in control, Henry Ford II decides to hit him where it hurts and beat him at the 24 Hours of Le Mans endurance race. Wanting the best possible person to make it happen he brings in Carroll Shelby who won Le Mans who then brings in expert mechanic and driver Ken Miles…

An amazing piece of filmmaking Ford Vs Ferrari is a great film. It is one of the best big studio films of the year.

I honestly don’t know what to say. This is a true big screen epic. A human tale, we fall in love with Shelby, Miles and the team, and there twists in turns delight and sadden us. Our heart breaks at times and we yelp with delight when it all goes right not because we have been manipulated but because we care about the characters. Frankly the human element is so good that you could eliminate all of the racing and the film still would work. And then there is the race sequences. Some of the best race sequences I’ve ever run across grab us and hold us hostage, even when we know how it will go. They are so well done that they should get the film multiple Oscars (especially considering the races are cobbled together from multiple locations)

The film is a stunner on every level. It also gets better and better as it goes on.

And while I might quibble about one thing….I wouldn’t change one frame.

A great film, and a must see -especially if you can see it on a big screen.
Posted by Steve Kopian at December 10, 2019