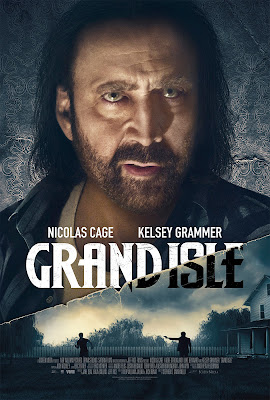 GRAND ISLE concerns a young man who ends up arrested for murder. Needing to clear himself he tells his version of what happened when he was hired to repair a fence for Nic Cage and his wife. Racing to get the fence done he ends up trapped in the house by a storm. As the weird secrets of the house are revealed, the man must fight for his life from his twisted hosts.

A small scale thriller isn’t going to be the next big thing, however it is going to entertain for its 90 or so minutes as it’s batshit crazy plot spins out. Over done and over cooked this film takes the notion of Southern Gothic and then amps it up a few degrees. You never really buy what’s happening at any point, but you can’t stop watching because you have to see how this is all going to come out.

The performances by everyone other than the two leads are quite good and they manage to keep the film on an even keel, even when then two big names kind of phone in their performances. Kelsey Grammer has never been this stiff and I was forced to wonder if his part was filled by a mannequin from a low rent Madame Tussaud. Cage is not stiff but it’s clear he is doing the part by rote and was counting the money he was being paid in his head.

Currently in theaters and on VOD
Posted by Steve Kopian at December 06, 2019