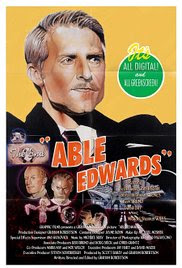 Story of the life and times of Abel Edwards, or more to the point his clone. The original Edwards was a Walt Disney like film maker/business man who died on the eve of the opening of his Florida theme park. decades later, after mankind has moved into space when a deadly virus reduced human population by 90% the Abel Edwards corporation is floundering. In an effort to get back on track they decide to clone their founder and so begins the life and times of the clone. We watch in flashback the life of the clone Edwards as his life is recounted at a probate hearing concerning his wealth and company.

this off beat film with echoes of Disney and Citizen Kane was shot entirely on green screen sets. The fact that I'm recounting that first kind of tells you I'm not particularly fond of the film, since there isn't much to say beyond that. An okay film, that is almost bland. This is the life of a man who is not his own, it's an interesting concept but it never really amounts to much with the story kind or arcing in ways that you can kind of predict. It doesn't help that the green screen sets are unevenly handled and while their use clearly allowed for the film to be made cheaply, the effect is far from realistic.The effect is similar to several films released to DVD by Alpha Video under their New Cinema banner rather than things like Sky Captain, Immortal or any other film shot similarly, However you forgive cheapness in the Alpha titles since they somehow make it charming and here they really don't.

Despite some occasionally beautiful black and white images this really doesn't have much to recommend it and given the choice I'd take a pass.(I somehow think that with out Steven Soderbergh's name attached as a producer this film would have been buried)
Posted by Steve Kopian at October 22, 2017