SELECTIONS INCLUDE COCAINE PRISON, THE RAPE OF RECY TAYLOR, & HALL OF MIRRORS
Lineup Unveils Some of the Year’s Most Compelling Investigative Films
WASHINGTON, DC (Wednesday, October 4, 2017) – Double Exposure Investigative Film Festival and Symposium announced the complete film program of its third edition today, featuring world, U.S., and Washington, DC premieres of new documentary films that go beyond the headlines to capture riveting stories and confront matters that have been hidden from the public, until now.
The eleven films in this year’s program, running from October 19-22, represent the largest and most ambitious lineup yet. With the titles announced today, Double Exposure has quickly become Washington’s premiere fall festival for films at the intersection of investigative journalism and visual storytelling.
With screenings in the evenings and weekend, the film program is intertwined with a daytime symposium bringing together leading investigative journalists, film directors, producers and funders. Symposium topics this year include panels on “the real take” on fake news, protecting sources and subjects in newly hostile environments, immersive and undercover reporting, and conversations with leading filmmakers.
“We are excited to bring these probing, new investigative documentaries to Washington audiences,” said Diana Jean Schemo, Double Exposure’s founder and co-director.  “This season’s slate explores timely issues in our nation’s political life just now, including race in America, the drug trade, Latin America, and the media itself.”
“The films in this year’s lineup are not only great works of journalism, but great works of cinematic storytelling that bring vivid and distinct focus to a range of topics and issues otherwise left unseen,” said Sky Sitney, Double Exposure co-director. 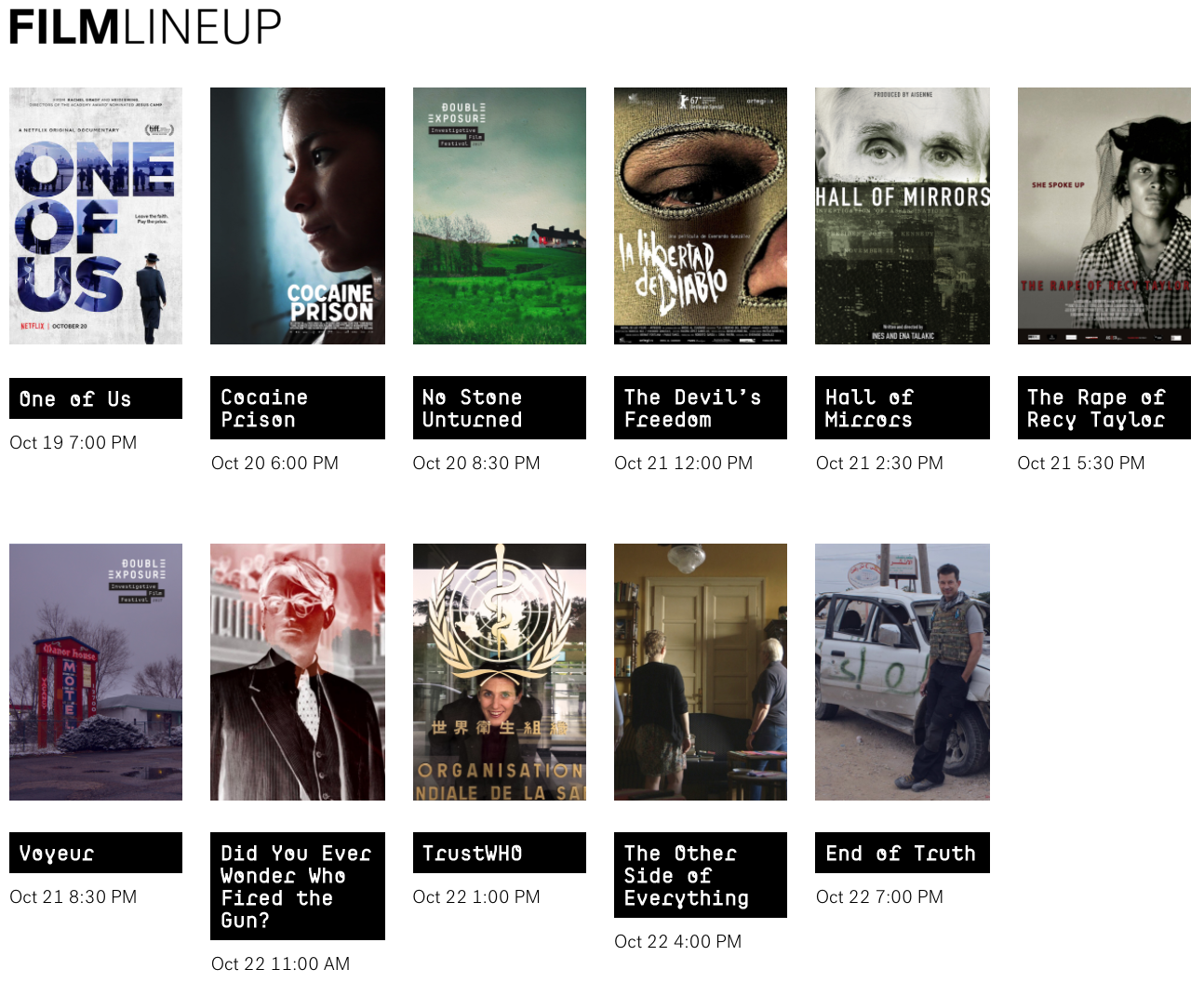 From inside Bolivia's most notorious prison a cocaine worker, a drug mule and his younger sister reveal the country’s complex and inescapable relationship with cocaine.

In searing testimony from both victims and perpetrators, this documentary paints an indelible portrait of violence in Mexico. Using masks to protect the identities of his subjects, filmmaker Everardo González brings a rare candor to their tales.

Travis Wilkerson sets out to explore the truth behind a family story: that his white supremacist great grandfather killed a black man in his store in lower Alabama in 1946.

An emotionally powerful investigation into the political and criminal enterprise of kidnappings as ISIS rose to power in war torn Syria. By intercutting exclusive footage with intimate interviews of negotiators, investigators, fixers and even a used car salesman who are caught up in the confusion, the filmmakers examine the leads that led to lies revealing the terrible consequence of misinformation when lives are at stake.

Edward Jay Epstein has built a career on taking a deeper look at hidden trends and unquestioned scripts that enter mainstream thinking. In Hall of Mirrors, he delves into Edward Snowden’s historic leak of data on U.S. government surveillance, delighting in the absurdities he discovers.

In 1994, six men were gunned down and five wounded in a pub while watching a World Cup soccer match in Loughinisland, Northern Ireland. With a police investigation that was perfunctory at best, the case remained unsolved. In this non-fiction murder mystery, Academy Award-winning documentarian Alex Gibney reopens the original case to investigate why no culprit was ever brought to justice.

After the screening, director Alex Gibney will be in-conversation with Mark Mazzetti, Washington Investigations Editor for The New York Times.

Academy Award nominated filmmakers Heidi Ewing and Rachel Grady follow the lives of three people who have chosen to leave the world of Hasidic Judaism. A Netflix Original Documentary.

After the screening, directors Rachel Grady and Heidi Ewing will be in-conversation with Ruth Marcus, columnist for The Washington Post.

THE OTHER SIDE OF EVERYTHING
U.S. Premiere
Director Mila Turajlic
Serbia

A locked door inside a Belgrade apartment has kept one family separated from their past for over 70 years. As the filmmaker begins an intimate conversation with her mother, the political fault line running through their home reveals a house and a country haunted by history. She fights and secures the release of hidden records that the nationalist government had removed from public archives. The chronicle of a family in Serbia turns into a searing portrait of an activist in times of great turmoil, questioning the responsibility of each generation to the next.

Recy Taylor was gang raped by 6 white boys in Alabama in 1944. Unbroken, she spoke up, and with help from Rosa Parks and legions of women, fought for justice. Entwined through family and social ties with local police, Taylor’s rapists were never tried for their crime. The film explores the largely hidden phenomenon of white men raping black women in the south, a crime all but ignored by law enforcement and the press.

Is the World Health Organization sick? The filmmaker and mother Lilian Franck reveals clandestine influences by the tobacco, pharmaceutical and nuclear industries on the organization, charged with protecting global health.

Voyeur follows journalist Gay Talese as he reports on one of the most controversial stories of his career:  a Colorado motel owner, Gerald Foos, who spent decades spying on his guests and recording their private moments. A Netflix original documentary.

The Symposium program was announced earlier this month: http://doubleexposurefestival.com/2017-symposium/

Passes are available at: https://www.eventbrite.com/e/double-exposure-investigative-film-festival-symposium-passes-tickets-35010315797

The festival is now accepting requests for press passes.

In recent years, the creative landscape of films inspired by investigative reporting has flowered in unexpected and exciting ways, from Spotlight, which took audiences inside The Boston Globe investigative team, to Blackfish, which exposed mistreatment of orca whales at SeaWorld, to Citizenfour, which gave us a front-row seat on Edward Snowden’s massive release of files on government surveillance.

Yet this flourishing of creativity comes just as the rights of journalists and visual storytellers face unprecedented challenges on nearly every level: politically, socially, legally and financially.

Double Exposure, a project of the nonprofit investigative news organization 100Reporters, showcases the best new films inspired by the investigative instinct, in a bid to raise public recognition of this vital form of reporting that doesn’t just ask tough questions, but delivers answers. It pairs film screenings with a concurrent symposium for journalists and filmmakers to connect with each other, and with the producers, editors, funders, and experts who can advance their work.

Major supporters of Double Exposure include the Reva and David Logan Foundation, the John D. and Catherine T. MacArthur Foundation, and the John S. and James L. Knight Foundations.