The Light of the Moon opens Wednesday 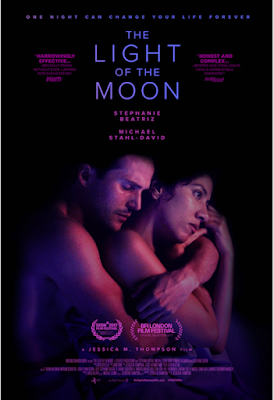 Stephanie Beatriz stars in Jessica M. Thompson's story of a victim of sexual assault trying to deal the fall out after the attack.

Heartfelt and occasionally moving film has me split between my head and my heart.

Emotionally the story of one woman's battle with the waves that rumble through her life as the result of an act of violence is nicely done. I like that it doesn't take the easy way out and doesn't follow what would be the typical course you would expect from an American film. There are nice little twists and turns here that keep it from ever becoming anything you can plot all the way to the end. I love it all always feels very real.

Intellectually I'm less enamoured of the film. How the film is shot works against the central drama since some of it plays out like an unremarkable TV movie. The film looks like we been here before with the shots in some sequences looking and ordered as if they were in a TV cop show. While it is never enough to kill the film it does cut the emotion of some scenes making what should have been a great film just a good one instead.

ADDENDUM:
This review originally ran during the Greenwich Film Festival in June. While I still stand by the review, I find that despite my reservations that film has stayed with me since then. I've seen well over a two hundred films since then and I find that the film is still fixed in my memory and haunting my thoughts-especially with all of the talk  of sexual harassment in today's news reports.

To that end I would strongly suggest that you see THE LIGHT OF THE MOON for a film that will enlighten you and hang around when others have disappeared.
Posted by Steve Kopian at October 29, 2017