The Death and Life of Marsha P Johnson opens tomorrow 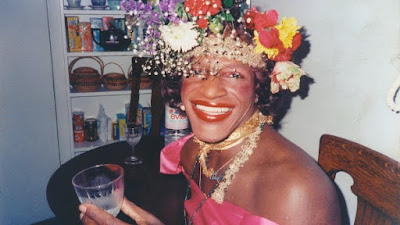 THE DEATH AND LIFE OF MARSHA P JOHNSON is complex film. Nominally the story of Miss Johnson, her life and death, the film actually casts it's film wider and takes in the story of Johnson's compatriot Sylvia Rivera as well as the struggle for transgender rights and respect even within the LGBT community.

The story of Miss Johnson is framed by the investigation of Victoria Cruz from the New York City Lesbian and Gay Anti-Violence Project. Cruz knows that most crimes against transgender women go unsolved or unpunished and she would like to determine what happened to Johnson who was one of the driving forces of the Gay and Trans Rights movement. Cruz is very much aware that looking into a death 25 years after the fact is going to be difficult but she hopes that someone or some piece of information will come to light.

I am not certain what to say about the film other than this film demands to be seen. This is a heady and frequently moving mix this is a film which needs to be seen about a battle that is still being fought. If you need further proof of the struggle still being fought consider that as the film was premiering at Tribeca Chay Reed was killed in Miami.

For ticket to the IFC showings go here
Posted by Steve Kopian at October 05, 2017