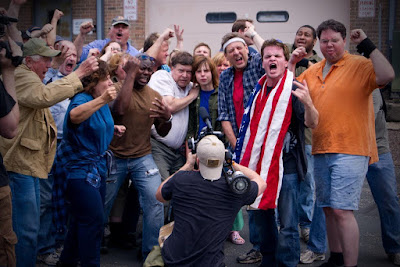 David Crowley is considered a martyr in the eyes of the anti-government movement of the far right and lunatic fringe where people like Alex Jones dwell. Crowley was trying to make a film called THE GRAY STATE about the coming of the New World Order and creation of a tyrannical state in America that will crush all our rights. After shooting a trailer Crowley kickstarted enough money to fund writing the script which he then began to shop around Hollywood. Unfortunately sometime around Christmas 2014 Crowley and his family were found shot to death in their home. The conspiracy theorists said it was because he knew too much but there may have been something simpler and sadder at work here.

Twisty film is one that needs to be seen to the end in order to get it's full effect. Beginning as a portrait of Crowley as he makes the trailer the film seems to be angling to be about a conspiracy theorist who was killed to be silenced. However at a certain point the film pulls the rug out from under us and we begin to piece together what really happened.

This is not a portrait of a conspiracy but a very troubled young man who fought one too many battles. It is the sad story of a man needing help who didn't get it. We watch as the conspiracy theorists ponder what "all" the clues mean while at the same time director Erik Nelson quietly lays out everything in such away that we realize what was going on was something else. All we need do is see some of the videos that Crowley shot when he was alone or listen to the odd audio recordings to realize that he could do bad all on his own. As several of Crowley's friends say on camera this is the only way that makes any sense once you really see everything. Even the picture above-the flow chart of THE GRAY STATE is a clue that provides an "ah ha" moment.

To be honest I was deeply bothered by this film. THE GRAY STATE is a film that speaks volumes about things from conspiracy theory, to the effects of war on soldiers, to on line life, to filmmaking, to mental illness and death. Watching the film I was spun around so much that when I left the theater I didn't walk so much as stagger. I wasn't sure what the hell I just saw but I knew I wanted to see it again so I'd be able to really piece it together.

A definite must see who loves documentaries, true crime stories or just a really good film
Posted by Steve Kopian at October 31, 2017