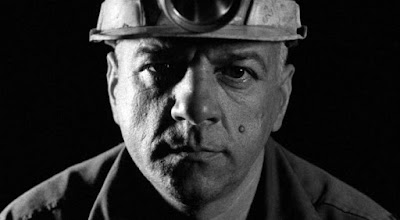 From Ben Russell who cave us A SPELL TO WARD OFF DARKNESS comes GOOD LUCK about the monotony of mining.

Russell's film is essentially two films, the first set in a Serbian copper mine. The second is set in an illegal gold mine in Suriname. Told in long takes the film often feels like its unwinding in real time.

How you react is going to depend on how you like films with long takes. While Russell will move his camera about within a take the takes are still largely long and static even if people are talking or a band in marchin (it opens with a 10 minute piece involving a brass band marching down a street). If you have the patience for this sort of thing you may eat it up.

On the other hand if you've seen any of the other recent films on mining such as the very good ELDORADO XXI then there is not going to be anything else to see here other than in the details.

While your reaction may vary I found there wasn't anything I needed to see here. Worse I can't really can't see the most people actually sitting through the entire film.

recommended for those in need of sleep
Posted by Steve Kopian at October 05, 2017

Email ThisBlogThis!Share to TwitterShare to FacebookShare to Pinterest
Labels: documentary, not worth the effort, NYFF 2017